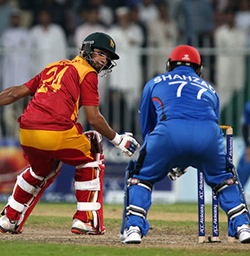 Afghanistan 215 for 6 (Shahzad 118*) beat Zimbabwe 134 (Masakadza 63, Moor 35, Hamza 2-15) by 81 runs
Afghanistan’s Mohammad Shahzad hit the fourth highest Twenty20 international score as his team beat Zimbabwe by 81 runs in Sharjah for a 2-0 series win.
The wicketkeeper-batsman, 27, batted through the innings for an unbeaten 118 from 67 balls, hitting 10 fours and eight sixes as they posted 215-6.
Zimbabwe were bowled out for 134 with 11 balls to spare, opener Hamilton Masakadza hitting five sixes in his 63.
Afghanistan also secured the one-day international series in Sharjah 3-2.
The Afghans, who became the first non-Test-playing country to win a multi-game bilateral ODI series against a Test side when they beat Zimbabwe last year, are now ranked higher than them by the International Cricket Council in both T20 and ODI cricket.
Afghanistan, whose national team was only formed in 2001, are now ninth to Zimbabwe’s 14th in the shortest format, and 10th to their 12th at ODI level.
They have won eight and lost six ODIs against Zimbabwe, and won all four of their meetings in T20 cricket.
The sides will meet again in March, having been drawn together in Group B of the first round of the ICC World Twenty20 in India.
Only one team from that group – which also contains Scotland and Hong Kong – will make it through to join the eight major sides in the Super 10 stage.Advertisement