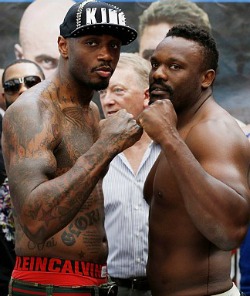 FORMER world title challenger Chisora headlines against unbeaten American Malik Scott at Wembley Arena Saturday night with the vacant World Boxing Organisation International heavyweight title on the line.
“I feel good in myself right now, everything is great,” said Chisora, British heavyweight boxing’s bad boy, accused in the past of being a hoodlum, of kissing, biting, slapping and spitting at opponents – who appears to have turned a corner.
“The diet, which involves me eating just the food delivered to me for each meal has gone well, and anger management lessons are going well. Everything for me is amazing.”
“You know when your mother is always in your ears? One day she’d had enough and she said ‘why can’t you just listen to me for once in your life?’
“I thought I’ll do it for six months and if it doesn’t work out I’ll do it my own way. So it was my mother who made me change, she said I needed to start listening to people,” he explained.
“You have to respect your mother, and a clip around the ear from your mum is something which has an effect on you,” said the notorious North London heavyweight.
“Then Frank Warren got me in his office and had a go at me in front of my mum and trainer. Frank said ‘I don’t understand’ and I saw tears in his ears.”
“Me and Frank have come a long way and I thought, ‘you know what, I’ll listen’. Frank cares for his fighters and he had a go at me like he was my own father. He said ‘You’re f******* around, why the f*** am I hearing this?’”
“It was the first time Frank had sat me down and talked to me like that. He told me that he believed in me.”
Last year, Chisora had to fight David Haye under a Luxembourg licence because the British Boxing Board said he was “not fit to hold one”.
Warren, who has stood by the Finchley heavyweight – through thick and thicker – admitted yesterday: “In his last fight, Dereck looked like a load of blubber. He’d be going down the gym and coming home and having a pie. You and I can do that, but not him.”
“I just sat down him and gave it him straight. He has a lot of talent but was letting himself down. Then I got in Violet’s ear about it and she got on to him as well. It looks like he got the message. He looks fantastic right now. This is the acid test on Saturday night.”Advertisement

Scott dismissed his opponent as a “joker” and “hyped-up journeyman”.
“I don’t rate Chisora at all. He’s just a hyped-up journeyman. He’s what we call in America a tomato can. If I look good destroying this joker in two or three rounds, then I’ll go back home a happy man,” said the American.
“This guy shouldn’t even be allowed in the ring with me, let alone say my name. I am an A-level fighter and I feel that I’m coming down to C or D level against him. That’s how bad he is.”
“I’ll be fit and in the shape of my life, I just hope Chisora is in shape to at least make a fight of it. But I have a feeling that won’t be the case and he’ll come in looking like he has been training at McDonald’s.”
For his part Chisora predicts a riotous stoppage over Scott, unbeaten with 35 wins one draw, come the first bell.
Scott is a clever, elusive boxer, who stepped away from the ring for almost four years through two biceps injuries and “management and family issues” but has come back under Hall of Fame trainer, 71-year-old Jesse Reid, who was once shot at by boxer Bruce Currie, after he had told his charge that he needed to retire.
Chisora will have to hunt Scott down, because he is elusive. Slick American boxer against busy, bullish British fighter. Chisora will need to get to Scott and stop him, or hurt him, if he is not to fall behind on points, against the feet and jab of the North Philadelphian.
Whatever happens, it should be an intriguing contest, and although Chisora was beaten by WBC champion Vitali Klitschko in Germany in 2011, he remains only two to three good wins from challenging for a world title again.
CHISORA NEEDS A WIN