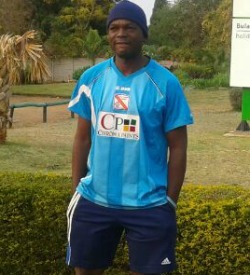 Monomotapa 0-4 Triangle
MISHECK Mburayi netted a brace as Triangle hammered relegation candidates Monomotapa 4-0 in a Castle Lager Premiership tie at Gwanzura Stadium on Tuesday.
Monomotapa players clearly lacked match fitness after they boycotted training in the build up to the game protesting the non-payment of salaries allowances and they Harare side paid dearly for it.
In his post -match interview, Assistant coach Conrad Nyambabvu, admitted they had not trained in the week leading to the match.
He however, expressed confidence Monos would survive the dreaded chop.
“The guys tried their best. We didn’t prepare for this match,” he said.
“We just met here today. The players are demotivated and had even threatened not to take part in the match. But today something has been done and I am sure they will be able to put up a fight. We are not conceding relegation yet.”
His opposite number Gishon Ntini was delighted with the victory.
“We played well but Monomotapa have got quality,” said Ntini.
“You could see from the body language of the players that they are not motivated but for us we are happy with the victory. We have not been playing well at home.
“I don’t know why – perhaps it has something to do with the mentality but now we are declaring war on everyone. We have got FC Platinum in our next match at home and we are looking forward to win. We are here to win matches not to make friends.”
However, it was the financially troubled side Monomotapa who started brightly in the first 20 minutes of the match with Charles Rukwani and Hillary Mugoniwa coming close only to be denied by Triangle goalkeeper Brighton Chipula.
The home team later relinquished their superiority later- allowing the visitors to dictate the pace.
Mburayi – signed from Motor Action in the midseason transfer window – headed firmly into the nets off a corner kick from veteran Norman Togara after 39 minutes to open the account for Triangle.
Playmaker Pascal Manhanga then added the second early in the second half- capitalizing on a mistake by goalkeeper Tapiwa Zvaita.
Zvaita intended to dispatch a long ball in the 52nd minute but it fell into the path of a grateful Manhanga who lobbied the ball over the keeper to make it 2-0.Advertisement

Mburayi then completed his brace five minutes from the end after winning a tussle for the ball with the keeper following a good pass by the ageless Limited Chikafa.
But substitute Lameck Nhamo scored in stoppage time – drilling a low shot past a hapless Zvaita to sew up the tie.
The win took Triangle to eighth position with 32 points from 24 matches while Monomotapa remained stuck on third position from the bottom with a just 24 points.