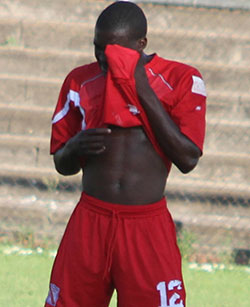 Monomotapa 0-1 How Mine
ADIOS Monomotapa!
From being the 2008 Premier Soccer League champions and reaching the mini-league phase of the Caf Champions League, Monomotapa have now said their farewells to the top flight league.
On Thursday, they succumbed 1-0 to the real giant killers How Mine at Gwanzura, who count Highlanders, Dynamos and Caps United among some of their victims this season.
Thembani Masuku, the man who sunk Dynamos in the Mbada Diamonds Cup quarterfinals, struck the only goal of the match in the 47th minute to seal the fate of the former champions.
Monoz are third from the bottom with 26 points from 28 games and even if they win the next two matches they will reach a total of 32 and still remain rooted to the same spot, joining Motor Action and Tripple B.
Next in line could be Black Rhinos who host Hwange (38 points) at Rimuka on Sunday, or Black Mambas who are at home to Tripple B. Rhinos are on 34 points, Hwange are on 38 and Mambas on 35.
Or worse still, Buffaloes, who have 35 points, who face Monomotapa on Sunday at Sakubva.
Shabanie Mine, on 37 points, need to beat Triangle at Maglas to survive relegation and the one point they picked up against Dynamos on Wednesday could be key to their survival plans.
Since team owner Solomon Mugavazi was banned by Zifa for five years his alleged involvement in the Asiagate match fixing scandal, he took away his riches and the team has struggled since then.
They were chucked out of their training ground at Alex Sports Club in Harare for failing to pay ground rentals. A $15,000 injection from Mbada Diamonds just before they were knocked out by Triangle 4-0 helped a bit.
Thursday’s tale was a sorry sight, as the team had not even trained ahead of the match and coach Biggie Zuze was not even sure they were going to pitch up.
Their best player in the last two seasons Ronald Chitiyo has already made it clear he will be at Dynamos next season joining Russel Madamombe, Cliff Sekete and Artwell Mukandi from Monoz.
Fixtures
Saturday: Motor Action v Caps United (Rufaro) SS9,
Sunday: Chicken Inn v Dynamos (Barbourfields), Black Mambas v Tripple B (Morris Depot), How Mine v FC Platinum (Luveve), Buffaloes v Monomotapa (Sakubva), Black Rhinos v Hwange (Rimuka), Harare City v Highlanders (Rufaro) SS9, Shabanie Mine v Triangle (Maglas)Advertisement