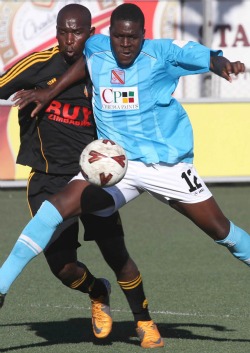 Monomotapa 2-1 Motor Action
FORMER champions Motor Action suffered their eighth defeat of the season and dropped to 15th place on the league table after losing 2-1 to Monomotapa at Rufaro on Monday.
With the Castle Lager Premier Soccer League reaching the halfway stage, there is no doubt Motor Action coach Joey Antipas is feeling the heat after they were floored by two goals from Agrippa Murimba and Ronald Chitiyo.
Edward Tembo scored the Mighty Bulls’ consolation. With the win, Monoz moved into 10th place with 19 points while the Bulls are clearly singing the blues.
Nkululeko Dhlamini, who stood in for Monomotapa coach Biggy Zuze, who is currently attending a Caf B Licence course, said his side was relieved to get the maximum possible points after last winning early last month.
“It was a good day in office and collecting three points after so much time of struggling was long overdue for the guys,” said Dhlamini.
“The points are important because if you look at the log table there is not so much difference between the teams.
“So the most important thing is to keep winning and closing in on the top teams,” said Dhlamini.
Bulls coach Joey Antipas said financial problems at the club were beginning to affect performances on the field of play.
“We are capable of competing but we have got serious lack of motivation. I should say the zeal to win is just not there too. At the end of the day if you take a donkey to a watering hole, you cannot force it to drink,” he said.
“Our position on the log is not good. We are staring relegation and for us to get out of this mess it needs a plan. We are facing serious (financial) challenges and at the moment we haven’t got a plan B in place.”
The two teams meet again on Sunday in the quarterfinals of the BancABC Super Eight at Gibbo Stadium in Chiredzi before a reverse fixture in two weeks.
However, the league will take a break this weekend as last season’s best eight teams battle it out in the cup competition which returns after a year’s break.
Top of the bill is Highlanders and FC Platinum clashing at Mucheke Stadium in Masvingo on Saturday and Dynamos seeking revenge over Buffaloes at Gibbo the following day.
Dynamos were embarrassed 3-2 last Wednesday at Sakubva in Mutare despite spirited attempts by match day referee Langton Chitsa to sway the game in their favour via two penalties.Advertisement

Chicken Inn and Shabanie will start the battle for a semi-final place on Friday at Mandava Stadium in Zvishavane, just a week after they met in a league fixture which the Bulawayo side won 2-1.