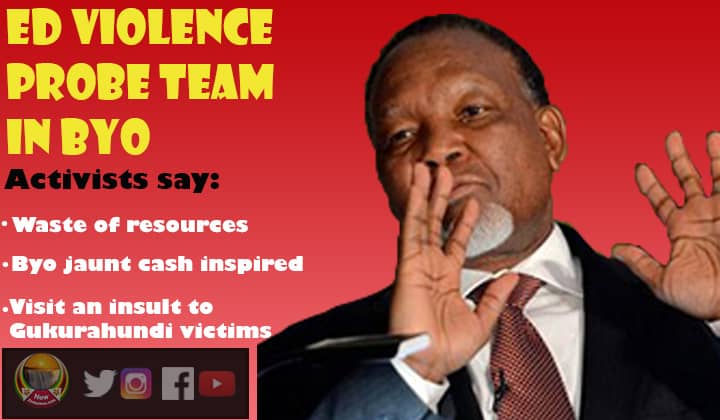 THE Kgalema Motlanthe led Commission of Inquiry into the ill-fated August 1 post-election demonstrations is certain to fly into a Gukurahundi storm this Friday as it takes its public hearings into the Harare violence to Bulawayo.

The probe team, which has already conducted similar hearings in Harare, will be in the country’s second largest city on Friday and Gweru on Saturday.

Activists and political parties in Bulawayo told NewZimbabwe.com Thursday it was both a waste of national resources and rather insensitive for government to sanction hearings on the killing of six civilians by soldiers in Harare when there has not been any similar attempt to conduct hearings into the 1980s killings of an estimated 20 000 civilians in Midlands and Matebeleland provinces by the same military in what is commonly referred to as the Gukurahundi massacres.

Nketha Mangoye Dlamini, Alliance for National Salvation ANSA secretary general, said the commission‘s coming to the city is of no relevance and a sheer waste of money.

“As ANSA, we believe the Montlanthe commission should have confined its investigations in Harare where the killings happened,” he said.

“If they felt that someone in Bulawayo or Gweru might have information concerning the shootings, the best thing was to place an advert and ask those people with evidence to come to Harare.

“Since most people in Bulawayo are a bit divorced from what happened in Harare, they will certainly raise Gukurahundi issues which directly affect them.”

Dlamini said the Emmerson Mnangagwa appointed commission will likely receive a hostile reception from the people in the region particularly relatives and survivors of the Gukurahundi atrocities.

His sentiments were also shared by ZAPU spokesperson, Ipithule Maphosa who also described the commission’s visit as unnecessary, adding that it was a way by the seven member probe team to make more money through travel and subsistence allowances.

“The commission has quickly learnt from Zanu PF and mastered the art of abusing and looting Zimbabwean funds. There is no other reason for them making this expensive trip,” he said.

Maphosa said the commission’s visit to Bulawayo was an insult to the people of Matebeleland as well as the victims of Gukurahundi.

“Over thirty years have gone while people still wait for the closure of the 1980s genocide in Matebeleland and Midlands. Nothing has come out from the government.

“How a government can ignore tens of thousands of deaths at the hands of the army only to spring to action for six people speaks volumes about a government whose only preoccupation is power amassing and retention,” added Maphosa.

Former cabinet minister and now Public Policy Research Institute of Zimbabwe (PPRIZ) director, Gorden Moyo said there was nothing wrong with the commission coming to the city.

“The hearings on callous, criminal and cruel murder of innocent citizens are welcome in any part of the country including Bulawayo.

“For Bulawayo, these hearings should serve as a precursor to the much awaited hearings on the atrocious activities of the 1980s.

“The people of Bulawayo, Matebeleland and Midlands provinces and indeed all Zimbabweans of conscience have a legitimate expectation that the current hearings will act as a launch pad for the bigger, broader and comprehensive programme of unearthing the hidden truths about the fate of the 20 000 victims of the 5th brigade,” Moyo said.