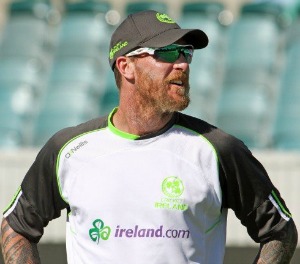 TWELVE MONTHS AFTER leaving Ireland’s tour of the Caribbean with a ‘stress related illness’, cricketer John Mooney has once again spoken openly and candidly about his battle with depression and alcohol.
Mooney and the Irish squad have just returned home from the World Cup in Australia/New Zealand and in an honest and powerful interview with Brendan O’Connor on RTE’s The Saturday Night Show, the 33-year-old revealed how the tournament was a struggle for him.
“It’s been a difficult few months,” he said. “The World Cup was difficult, very difficult. I spend an awful lot of time by myself on tours, in hotel rooms and it’s very easy for your behaviour to be not as good as it should be and find yourself in trouble quickly in foreign countries that our dangerous.
“But the lads are great. There’s a couple of the guys who you can play darts with or play table tennis or golf and there’s certain senior members of the squad who drop in and we look after each other.”
Ireland won three games during the campaign but fell agonisingly short of qualifying for the quarter-finals as West Indies advanced by virtue of their superior net run-rate.
The victory over Zimbabwe in Hobart made headlines for the wrong reasons as a Zimbabwean newspaper claimed their side had been ‘cheated’ out of the tournament by Mooney after he took the catch which swung the game back in Ireland’s favour.
The headline referred to Mooney as an ‘alcoholic’ before launching into a tirade of abuse which emphasised the Dubliner’s off-field troubles.
When asked about the article, Mooney explained it was something he wasn’t aware of until a few days after it surfaced.
“We’d just played in Hobart on the Saturday and spent the following day travelling to New Zealand – we were in our own little world.
“You only see what you want to see and it was a Zimbabwean newspaper so you wouldn’t be reading that anyway. Simmo [Phil Simmons] called me aside after the Indian game and told me what was in it and what the headline was.
“What can you do? I was more worried about the game that we had just lost and the fact we had to go and play Pakistan the following week. What some bloke in Zimbabwe was writing about me was irrelevant.
“I’d never mentioned the word alcoholic which he mentioned in his headline. It’s such a loose term, there’s people out there who’d battle with alcholol and they’d only have a glass of wine a night.Advertisement

“Everybody’s different, it’s a huge word.”
Mooney received widespread praise for his honesty and courage to once again address the issues in the public domain. Last September, he revealed a childhood trauma had triggered the illness and how he sought solace in alcohol.
“I’m doing well at the moment but I’m not there yet, it’s a long battle. To get on with my life, my cricket and my family life I had to do something and seek help.
“I needed to know why I couldn’t stop drinking. I knew the reasons really, it was due to my father dropping dead on front of me when I was 11 but I’ve learned to live with what happened and loads of people are in a similar position and I’m just grateful I went and got help and I’m here today because of it.
“I’m trying my best everyday not to drink and just keep myself mentally as well as possible. By trying to get to the root of these problems has probably kept me on the park playing cricket and kept me together with my wife and together as a person.”