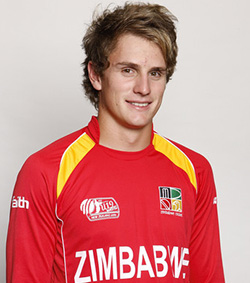 ZIMBABWE live to fight another day after an unbroken partnership of 94 between Sikandar Raza and Peter Moor gave them the lead against the Windies on the fourth day of the second test at Queens Sports Club.
Sikandar Raza and Moor came together with Zimbabwe reeling on 46 for four in their second innings on Wednesday, still needing 76 runs to make the West Indies bat again.
By the close they had carried the home side to 140 for four to claim an 18-run lead, with Raza adding his second half-century in a match where he has also claimed a five-wicket haul.
Raza made an unbeaten 58 and Moor batted out 152 deliveries for his 39 not out to ensure that the two-match series, which the West Indies lead 1-0, will go into a final day.
Earlier, Shane Dowrich and Jason Holder both scored centuries before the West Indies bowlers struck four times to strengthen their grip on the match and series.
After Dowrich and Holder shared a record 212-run stand for the eighth wicket to carry the West Indies to a first-innings total of 448 all out on the fourth morning, fast bowler Kemar Roach picked up two wickets before lunch.
Pacer Shannon Gabriel and legspinner Devendra Bishoo followed up with a wicket apiece in the second session before Moor and Raza steadied the innings to take Zimbabwe to tea on 66 for four, still trailing the West Indies by 56 runs.
Zimbabwe’s chances of ending an 11-match losing streak in tests had looked good when Raza’s maiden five-wicket haul reduced West Indies to 230 for seven on the third afternoon at Queens Sports Club.
But Dowrich and Holder constructed the West Indies’ highest eighth-wicket partnership in history, guiding the visitors to stumps on 374 for seven before continuing their assault on Wednesday morning.
Holder enjoyed some fortune on 78 when he was dropped by wicketkeeper Regis Chakabva off the bowling of Graeme Cremer, and made the most of it as he went on to score 110.
Dowrich brought up his maiden test hundred with a towering six off Cremer, but the partnership was finally ended in the following over when the wicketkeeper-batsman was trapped lbw for 103 by Tendai Chisoro.
It is the first time since 1908 that numbers eight and nine have scored centuries in the same test innings.
Having gained his maiden test wicket, Chisoro went on to bowl Holder in his next over before wrapping up the innings when he trapped Roach lbw.Advertisement

The left-arm spinner thus finished with figures of 3 for 113, while Raza ended with 5 for 99.
Needing to bat big in their second innings if they wanted to win the match and earn a share of the two-match series, Zimbabwe made a horrific start when Roach dismissed the two openers in consecutive overs.
Craig Ervine and Brendan Taylor attempted to resurrect the innings after lunch with a patient stand, but Taylor was trapped lbw by Gabriel before Ervine was bowled by Bishoo for 22.