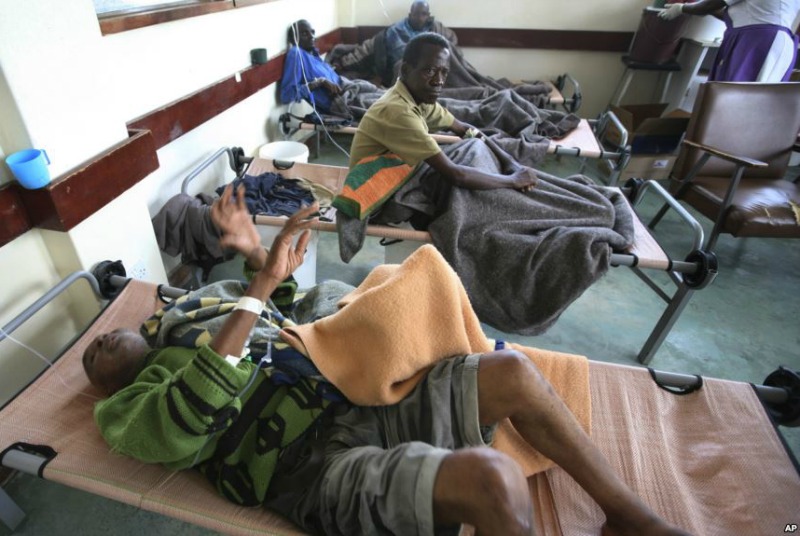 HARAARE city medical staff has admitted being overwhelmed by the current cholera outbreak amid fears the scourge could spread to other parts of the country after bodies of some of the victims were transported for burial in rural areas.

At least 5 people have been confirmed dead with 36 recently said to have been admitted at the Beatrice Road Infectious Disease Hospital for treatment.

More continue to be examined for symptoms of the deadly disease which had been reported in Harare’s Glen View and Budiriro suburbs.

During a Friday media tour of the affected areas, George Mutawa, a city doctor for Harare’s south western district said many suspected cases of the epidemic were among people who turned up for examination at Glen View polyclinic suffering dehydration.

“We are now overwhelmed by the numbers of people seeking medical attention and we have limited staff to render services needed at the moment,” said Dr Mutawa.

He also warned city authorities not to ignore the problem for fear “treatment would be forever”.

Among some of the cholera deaths reported were of people whose relatives had transported their bodies to rural areas for burial.

“Most of them went out of town. Maybe this was to avoid supervision,” said Mutawa, adding, “Cholera deaths should be buried on the same day so that people do not gather.

“We are now following up on them to avoid more infections. Only one body is still at the hospital morgue.”

Among some of the outbreak causes cited were poor sanitation and the sourcing of drinking water from unprotected city wells.

Boreholes have also been cited among the major causes of waterborne diseases with claims much of the water was not 100 percent safe to drink.

“Vending in open places where fresh meat, fish and all sorts of things are being sold in unhygienic places, burst sewer pipes and continuous flow of raw sewage for some years have also exacerbated the problem,” Mutawa said.

At the Polyclinic, long queues were witnessed as mothers seemed in panic when medical staff seemed not fast enough to attend to their wailing babies.

“We have been here since morning and we no longer have diapers for our children. We need urgent help now,” one woman shouted.

Harare Mayor Herbert Gomba, accompanied by Glen View South Constituency MP, Vimbai Java-Tsvangirai visited the clinic and homes of the cholera victims where they took time to donate some foodstuffs.

Gomba stressed the need for the identification of infection source while appealing for well-wishers to assist the victims’ families.

Harare City Council has, for years, failed to provide adequate service delivery to its residents.

Friday, raw sewage could be seen flowing along some roads in the Glen View 3 and Area 8.

Failure to provide clean water and to have proper and consistent refuse collection has led to many outbreaks of typhoid and cholera.