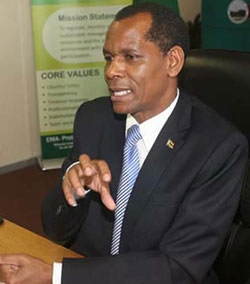 MORE confusion emerged this week about the country’s empowerment policy after a minister told Parliament on Wednesday that government had no intention of revising the Indigenisation and Economic Empowerment law.
Responding to a query in the House of Assembly during question and answer time, the Deputy Minister of Youth, Indigenisation and Economic Empowerment, Mathias Tongofa, said government would implement the indigenisation law in its present form.
“Let me tell the honourable member we don’t administer the Act through pronouncements in the media, we will administer the Act as it is. If they are any changes we will bring those changes before this house,” said Tongofa.
His position appears contrary to indications by his boss, Youth Development, Indigenisation and Empowerment Minister Francis Nhema, who recently said government would soon table before Cabinet proposals to deal with foreign ownership on a sector-by-sector basis.
“Government’s understanding is that while there is temporary dilution it will have a plan through which they can increase local participation over a given period.
“Government was determined to ensure that indigenous Zimbabweans held majority stakes in all business ventures and no sector will be exempted from the law,” said Tongofa.
Finance Minister Patrick Chinamasa this month told a two-day SAPES conference there was no one-size-fits-all approach for the indigenization exercise signalling significant climb down on a programme observers say was the reason foreigners shunned investing in the country.
“There was no one-size-fits-all, the only application of one-size-fits-all is that all sectors of the economy will have an equity model but what threshold will depend from sector by sector; over what timeline will also depend on sector to sector,” said the minister.
Chinamasa had earlier said government does not intend to grab 51 percent of investors’ money contrary to claims in some sections of the media.
“What is sometimes peddled is that you bring in your US$20 million and we take 51 percent of it. That’s nonsense. We have never said it and we will not do it. What we have said is that we want to encourage local participation on the basis of a given framework,” he said.
“The investors will pick their partner and also decide the price. That I think needs to be emphasised again and again. We are not going to get 51 percent of anyone’s money. It’s not the policy of this Government.”Advertisement