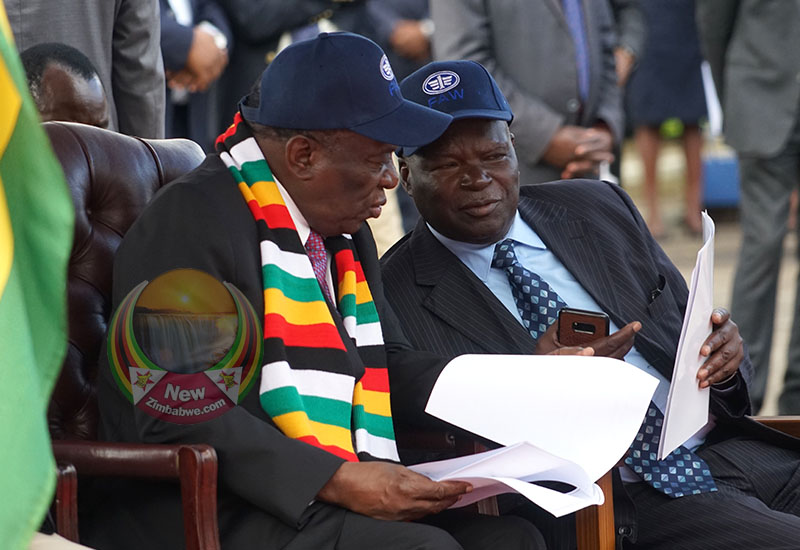 Mliswa took to Twitter Saturday to “reveal” what he claimed was Moyo’s multi-pronged attempt to wrestle power from Mnangagwa at the party’s December elective congress, after failed attempts at removing electoral processes.

Already, Mnangagwa is battling factional fights against a faction allegedly led by his deputy, Constantino Chiwenga, whom, according to Mliswa, Moyo argues has no leadership qualities.

He also has Sybeth Musengezi to deal with, a Zanu PF supporter challenging his 2017 ascent to party and state leadership.

Chiwenga is reportedly eyeing the top post, with some party supporters seconding his takeover after Mnangagwa’s failure to address the country’s worsening economic crisis.

Inside sources have also intimated with NewZimbabwe.com, Mnangagwa’s support is waning in rural areas where Citizens Coalition for Change (CCC) president Nelson Chamisa is now being seen as a real threat.

“Besides corruption, July Moyo is at the centre of a conspiratorial plan to usurp Mnangagwa from power. As we get into the second half of the year, it won’t be a surprise to see strange events unfolding as he seeks to cement his dreams of power,” said Mliswa.

“As it is, July Moyo is around 73 and if ED were to get a second term, July would be around 79 years old by the time ED finishes his second term. July is losing sleep over this because this would mean that he won’t be President of Zimbabwe and he is having none of it.

“July wants to be President of Zimbabwe badly, as he says that him being a Moyo means he is of the Royal bloodline (those that really know July , know that he is actually not a Moyo but a Zhou, he changed his surname way back).

“Now, here is the thing, it has already started, you will start to hear and see some rented crowds from within ZANU PF openly criticising ED, telling him to step down.

“This rented mob will initially act as if they are supporting the VP and as their chorus reaches fever pitch, they will show their true colours and support July. By initially supporting VP, they are simply playing the old divide and rule tactics.

“He wants the December congress to be an elective congress and he has been setting up party structures through vote buying in preparation for the big day.”

“I cannot comment about Mliswa, that is his own opinion,” said Moyo.

He is currently at the centre of numerous, questionable public deals, wherein he has been fingered in gross abuse of office. The Zimbabwe Anti-Corruption Commission (ZACC) has since commenced investigations into some of them.

Added Mliswa: “The US$344 million Pomona dumpsite deal was all designed to make Mnangagwa look bad in the eyes of the people within Zanu PF. On that one,  July deliberately misled the First Family, knowing how bad it will make them look.

“ED needs better advisors because July is making them drink from the poisoned chalice. Forget about the opposition, a lot of people within Zanu PF itself are livid. They are angry at the Pomona deal, so this is playing into July’s hands.

“I hope ED will realise that he is being led down a trap and move to cancel this dirty deal. If he wants to look at the real enemy, he should look no further than the enemy within.”

Mnangagwa is being blamed for Zimbabwe’s return to hyperinflation, workers’ poor wages and disregard for human rights by locals and the international community; things he would want fixed by 2023 when he faces Chamisa in the presidential race.