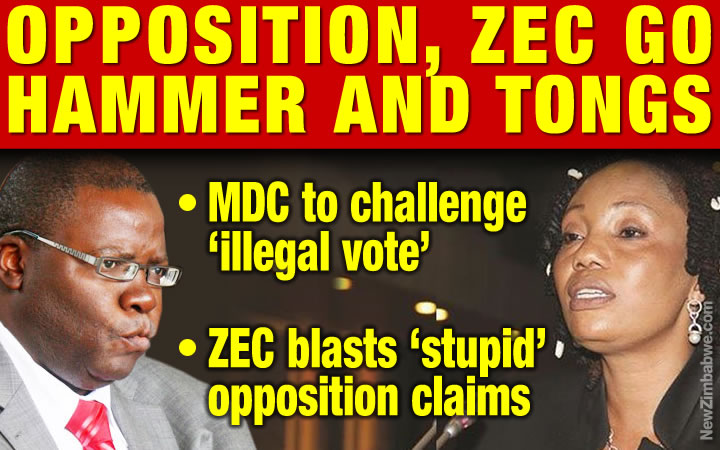 ZIMBABWE’S volatile electoral process was given a further spark Thursday when the opposition claimed hundreds of junior police officers in Bulawayo had been summoned to cast their votes in front of their bosses.

The Zimbabwe Electoral Commission (ZEC) was quick to issue a denial on claims which were first raised by social media images of police officers allegedly casting their votes.

MDC Alliance co-principal Tendai Biti told a press briefing late Thursday that “thousands” of police officers had voted under watch from their superiors across the country but mainly in Bulawayo.

“Today the 12th of July there has been massive voting across the country and in particular at Ross Camp in the city of Bulawayo. Thousands of members of the Zimbabwe Republic Police were casting their ballots,” Biti said.

“The purported legal basis for those disciplined forces to vote was that they were exercising their right to vote under Section 74 of the Electoral Act which deals with postal voting.

“Postal voting is still part of our law but it is designed to deal with officers who have been deployed either on diplomatic assignments or alternatively to police duties during a time of elections.”

“They (ZEC) were equally shocked because they were not there,” the former Finance minister said.

“Persons were voting the who of this afternoon in the absence of ZEC, international observers and party agents?!”

He added that besides being in breach of the law that prohibits voting at cantonment areas, ZEC was also in breach of an agreement struck between then chairperson Rita Makarau and political parties.

“Which agreement is still binding that there will be pre-deployment of officer to the stations, provinces and regions where they will be assisting in the elections and because of those officers were then registered in those areas.

“If there was an agreement, pre-deployment and pre-registration then there is no justification for thousands of officials to have voted today. This is breach of this agreement and the Electoral Act,” he said.

Biti said the Electoral Act provided that the person who makes an application to vote by postal vote will have an envelope and the list of those who would have made such an application should be made in public.

The opposition official and lawyer further claimed that: “To us this is chicanery, this a fraud, a blatant attempt to steal this election. Secondly, we all know that the law proscribes voting in cantonment areas and this yet another violation of the Electoral Act”.