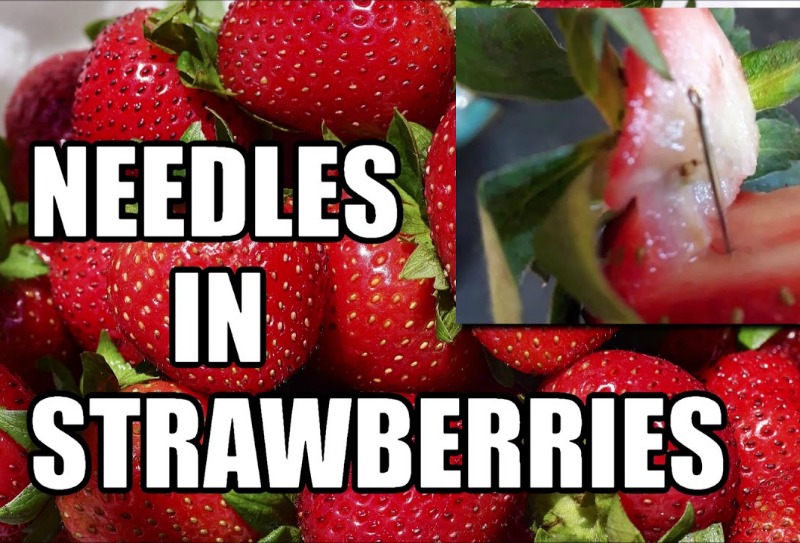 More than 100 people in Australia have reported finding needles or other shards of metal in strawberries and other fruit, according to the Australian government.

Home Affairs Minister Peter Dutton told reporters on Wednesday that he was aware of about 100 reports, adding that some might be false alarms or hoaxes, or the result of copycats, according to Australia’s ABC News.

The phenomenon, which has turned many Australians off buying strawberries and thrown Australia’s fruit industry into chaos, appears to have worsened over the past week.

News outlets have reported this week on needles being found in an apple and a banana.

The problem seems to have started with a Facebook post earlier this month by a man who said his friend had swallowed part of a needle hidden in a strawberry and went to the hospital.

Cases have since been reported in many parts of the country, according to a map compiled by News.com.au.

Lawmakers in Australia are considering legislation to more harshly punish people for putting needles in fruit.

According to Britain’s Daily Telegraph, the Australian government is due to hold a vote Thursday on whether to increase the prison sentence to 15 years from 10 years for those found guilty of tampering with food.

Australian Prime Minister Scott Morrison called people who would hide needles in fruit “a coward and a grub.”

“It’s not a joke. It’s not funny,” he told reporters on Wednesday. “You are putting the livelihoods of hardworking Australians at risk, and you are scaring children.”

He added: “And if you do that sort of thing in this country, we will come after you, and we will throw the book at you.”

The governments of Western Australia and Queensland are offering a reward of 100,000 Australian dollars ($72,000) for information.

Police said on Wednesday that they had arrested one person in connection with the phenomenon.

According to News.com.au, Stuart Smith, the acting assistant commissioner of the New South Wales police force, said: “In the last two days we found a young person has admitted to a prank, including putting needles in strawberries, and he’ll be dealt with under the youth cautioning system.”