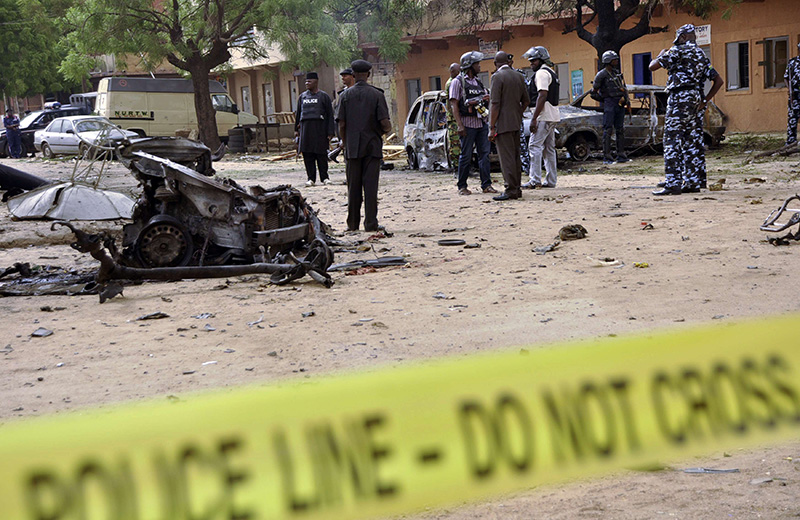 LAGOS: Suicide bombers killed more than 60 people at a mosque and a market in northeast Nigeria on Tuesday, in a twin attack bearing the hallmarks of Boko Haram and a day after US President Donald Trump pledged greater support to fight the Islamist militants.

The blasts, said to have been carried out by young boys, happened shortly after 1:00 pm (1200 GMT) in Mubi, some 200 kilometres (125 miles) from the Adamawa state capital, Yola.

Imam Garki, from the National Emergency Management Agency (NEMA), said a joint assessment with the police and Red Cross found that 26 people were killed and 56 were injured, 11 of them critically.

They were transferred to the Federal Medical Centre in Yola for treatment.

But a medical source at the Mubi General Hospital said they had received 37 bodies, while a rescue worker involved in the relief operation said he counted 42 dead and 68 injured.

“These I saw with my own eyes. We were counting as they were being taken,” said Sani Kakale.

Two local residents who attended funerals for the victims said the death toll was much higher — and could climb further.

“Before I left the cemetery I took part in the burial of 68 people. More bodies were being brought by families of the victims,” said Muhammad Hamidu.

“I think this is the worst attack Mubi has ever witnessed. The human loss is unimaginable.”

Abdullahi Labaran added: “We left 73 freshly dug graves where each victim was buried. There are still unclaimed bodies at the hospital.

Conflicting death tolls are not unusual in Nigeria. The authorities have also previously played down casualty figures.

Suspicion for the attack immediately fell on Boko Haram, the jihadist group whose quest to establish a hardline Islamic state in northeast Nigeria has left at least 20,000 dead since 2009.

Mubi has been repeatedly targeted in attacks blamed on Boko Haram since it was briefly overrun by the militants in late 2014.

Nigeria’s government and military have long maintained that the Islamic State group affiliate is a spent force and on the verge of defeat.

But there has been no let-up in attacks in the northeast, particularly in Borno state, adjacent to Adamawa, which has been the epicentre of the violence.

Nigerian President Muhammadu Buhari has been in the United States this week and met his US counterpart Donald Trump, who pledged more support in the fight against Boko Haram.

Nigeria has bought a dozen A-29 Super Tucano light fighter aircraft in a $496-million (413-million-euro) deal.

Trump indicated a further order for attack helicopters was also in the pipeline.

“These new aircraft will improve Nigeria’s ability to target terrorists and protect civilians,” Trump told a joint news conference with Buhari in Washington on Monday.

The sale of the aircraft was previously blocked by the Obama administration after the Nigerian airforce mistakenly bombed a camp for people displaced by Boko Haram, killing 112.

“How they think in terms of combat, in my opinion, is still thinking of things as conventional warfare,” Lieutenant-Colonel Sean McClure, the US defence attaché in Abuja, told AFP last month.

In Mubi, local volunteer Habu Saleh, who was involved in the rescue effort, described the aftermath of the bombing as “chaos”.

Health workers from the hospital mobilised to attend to the victims, despite being on strike over pay and conditions.

Abdullahi Labaran said the first bomber mingled with worshippers who had gathered for prayers at the mosque at the edge of the market.

He detonated his explosives “five minutes before the prayer started”, he added.

The second bomber blew himself up among the crowds of worshippers, traders and shoppers as they fled the first explosion.

On November 21, 2017 at least 50 people were killed when a suicide bomber blew himself up in a mosque during early morning prayers in the Unguwar Shuwa area of Mubi.

In October 2012, at least 40 people were killed in an attack on student housing in Mubi that was widely blamed on Boko Haram.

In June 2014, at least 40 football supporters, including women and children, died in a bomb attack after a match in the Kabang area of the town.