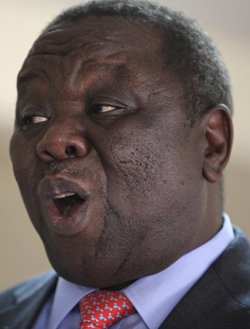 JUST over a month ago a great wave of optimism was building and sweeping across Zimbabwe.
People were furtively — then later even openly — daring to hope that they would ride in on the great wave that was forming. For some the mood was becoming euphoric.
The election took place and the wave broke. Deeply shocked, we all went down like Jonah and came up spluttering, washed up and beached on the same old desert shore from where we had started.
Once again we were faced with the tedium and the disappointment of more mis-governance, more kleptocracy, more injustice, more corruption, more burnt earth and more shattered dreams. After being forced to endure so much for more than a decade, we question how we can take any more.
Eddie Cross, MDC-T MP for Bulawayo South and one of the valiant criers from the wave crest, wrote the following in a moment of realism after being sworn back into the new Zanu PF-dominated parliament.
“We left parliament two months ago — then holding a majority in the Lower House, have come back as the opposition with 70 seats in a House of 270 members — unable to block legislation, even if we want to, but providing a voice for the majority in this beautiful yet broken land.
After 13 years of struggle, five elections and four years of the Government of National Unity we are no further forward than we were in 2000, in fact we are further back than we were then…”
What has gone wrong? How was the wave able to be undermined and broken? Why should Zimbabweans have to continue wandering around aimlessly in the desert for yet another five years under an octogenarian leader whose hunger for personal power trumps all other concerns? Why did Sadc not only allow the theft of the July 31 elections — but then applaud President Robert Mugabe and crown him as the next leader of the regional body when his people are getting poorer, hungrier, more desperate for jobs and leaving the country?
There is something intrinsically sick, evil even, in the Orwellian parody of it all. What is wrong with our African leaders that they should endorse such a fraudulent, dishonest result in this election? They saw the suffering and grieving on the funereal faces of almost all Zimbabweans as the results came tumbling out from Mugabe’s election rigging machine.
But closer to home, what is wrong with our opposition leader, Morgan Tsvangirai, that he should flip-flop around, sacrificing principle, because he thought that SADC would stand by them when things went wrong? Softly, softly they went, not wishing to upset Zanu PF when it came to taking farms, taking businesses and putting draconian clauses into the new constitution.Advertisement

Furthermore, they allowed Zanu PF to not only run the elections but to steamroller any opposition and to bring the date forward with unseemly haste.
When Zanu PF was on the ropes four years ago, Tsvangirai, as the new prime minister, had four years to consolidate his position and be out there for the people.
When our workers were severely beaten up and put in a high security jail in 2009, where was he? Where was he when our crops and tractors were all stolen?
Where was he when our homes and some of our workers’ homes were burnt to the ground, with everything in them? Where was he when I wrote him an open letter about these gross injustices, criminal activities and human rights abuses – and he failed to reply?
Where was the premier when he should have been standing on principle regarding the clause in the new constitution that allows the continued taking of farms and other properties on the basis that the owner is “white”, apparently not indigenous.
Where was the prime minister after the constitutional referendum when it was clear from the small queues countrywide that perhaps a million ghosts had floated out of the ether to boost the “yes” vote? Zanu PF went so far as to claim it was the largest ever turnout by the electorate — and by a very significant margin.
It was clearly a dry run for the July 31 elections but the prime minister, having called for a “yes” vote, was elated with the result, and failed to stand on democratic principle regarding the blatant rigging.
Where was the prime minister when the special vote was strategically and dishonestly manipulated by Zanu PF? Despite this, he still decided to contest the main election which was already becoming a blatant farce.
Why wasn’t the prime minister visible on the international stage prior to the elections? Why, when he had the majority in parliament, was he not calling for internationally-run elections as Mugabe had succeeded in doing prior to 1980? Why did he not insist on long-established democratic countries and organisations at least coming to Zimbabwe to observe the elections — as Mugabe did in 1980?
Why did Tsvangirai participate in an election when the internationally-guaranteed reforms in the road map to elections had not taken place? Why did he go ahead, knowing that Mugabe would not allow the Diaspora to vote?
He should have insisted that Mugabe respect and abide by the timely judgment given by the African Commission on Human and People’s Rights which ruled that the Zimbabwean Diaspora should be allowed to vote?
And why did he participate in the election when hundreds of thousands of young voters had not been able to register?
Why did he still go ahead when he was not allowed to view the voters’ roll — which he knew was a shambles — full of ghosts that would glide in on the day as they had in the constitutional referendum on March 16? And why did he participate in the elections when he had prior knowledge that Nikuv, an Israeli security company known to be an expert in election rigging, was on the Zanu PF payroll?
Why did Tsvangirai fail to speak out when the respected regional court of the Sadc Tribunal was dissolved at the instigation of Zanu PF? Ironically, this is a court that Tsvangirai also desperately needs in the light of the Zimbabwean courts being so partisan.
The only answer to these questions is that there is a crisis of leadership in the MDC. Principle has been thrown to the wind.
While Zanu PF carried on taking personal property, mining the diamonds and preparing for the election heist by continuing to block access to the voters’ roll, the prime minister was enjoying the comforts of government.
Furthermore, he was not only compromising his reputation with messy love affairs but was also calling for the lifting of personal sanctions on the very people who were bringing Zimbabwe to its knees.
The question we have to ask now is this: Where is the former prime minister in the aftermath of the election? Why is he failing to go around from province to province and district to district gathering evidence of election fraud and encouraging his supporters, many of whom put their lives and livelihoods on the line to vote out Zanu PF? Why does he allow his supporters to be victimised without standing up for and supporting them publicly?
If the former prime minister is tired — which he is certainly entitled to be given all that he has endured at the hands of Zanu PF, let him stand down and let someone who is energetic, God-fearing and not prepared to compromise on principle, take his place. I distinctly remember Tsvangirai being reported as saying that if he lost the election he would stand down.
So why the change of mind? After six bites at the election cherry (2000, 2002, 2005, March 2008, June 2008 and 2013) he has surely had his chance!
If we all manage somehow to get to 2018, can the people of Zimbabwe endure another debacle, another crash in the desert because of his lack of judgment as a leader? It is time for a new leader of the opposition!
Freeth is a dispossessed Zimbabwean farmer