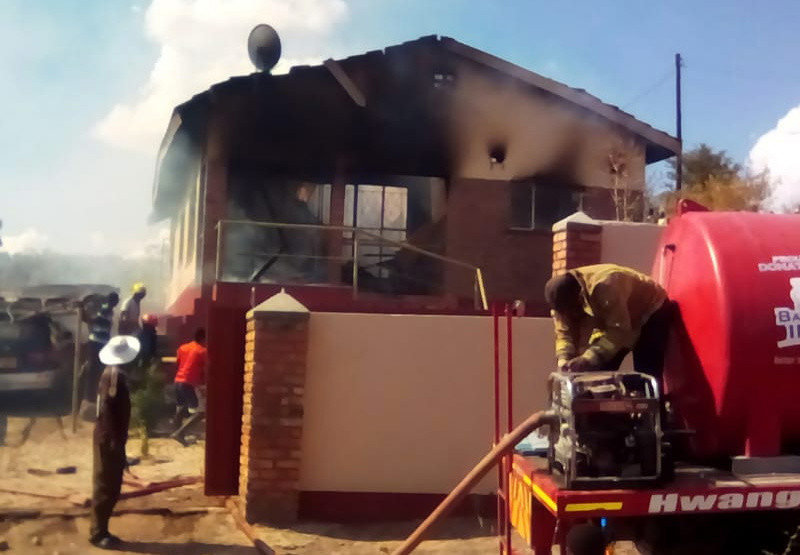 A HWANGE woman has been hospitalised at a local hospital after she collapsed with shock when her five-year-old son allegedly set alight the family home last Friday.

Also destroyed in the inferno was the family car and the entire household property.

The boy, his two sisters aged 10 and 16, and a housemaid aged 30, all escaped unhurt but all the property, including a family car parked in the yard, was reduced to ashes.

Only a sofa and kitchen table were salvaged by neighbours who had rushed to assist before the arrival of the fire brigade.

In her report to the police, the maid, Lesiwe Mudimba said the fire started at around 1 pm on Friday.

“I was in the kitchen with Clotildah Tshuma, 16, when we sensed the smell of smoke in the house. Lydia, aged 10 was in another room while Junior was in the bedroom alone,” she said.

“When we checked, we discovered that the fire was coming from the bedroom whereupon we alerted neighbours who immediately phoned the fire brigade and came to help put out the fire.”

She said the boy later told his 10-year-old sister that he had used match stick to burn his sister Clotiladh’s clothes tucked in the wardrobe.

The fire then spread across the whole eight-roomed house burning all property.

Fire fighters from the Hwange Local Board managed to put out the inferno but not before all the property had been burnt.

The three siblings’ mother Sophie Mwachivinga reportedly collapsed with shock when she was told about the incident and police on Sunday said she was still hospitalised at Hwange Colliery Hospital.

Police said investigations were underway and ascertain the value of the burnt property.