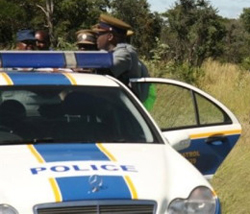 MOTORISTS and other travelers on Tuesday welcomed government plans to reduce the number of police roadblocks along Zimbabwe’s highways that had made journeys tedious and affected business.
Home Affairs Minister Ignatius Chombo said Monday that the roadblocks would be limited to four per province within the next week, except for exceptional cases calling for more.
“We have told the Commissioner-General of Police to reduce or remove all unnecessary roadblocks and leave the necessary ones,” Chombo was quoted in the state media as saying.
“We do not want to be seen as torturing our citizens,” the minister said.
Motorists and tourists had complained about the number of police roadblocks in the country. Some alleged that they could encounter as many as 10 on a single journey of less than 300 kilometers.
Motorist Peter Kawadza told Xinhua that he was happy with the move but remained skeptical on the numbers mentioned.
“Harare Province has at least five highways out to Nyamapanda, Mutare, Masvingo, Bulawayo and Chirundu. So how many roadblocks are we going to see along each of the highways and over what distances? Let’s wait and see how they will do it,” he said.
Another motorist Tapiwa Chikumbindi said while he welcomed the reduction of the number of roadblocks, police presence on the highways was still necessary to deter criminals.
“The roadblocks had become too many and were hindering the smooth flow of traffic, especially in urban areas during peak hours. However, we need them here and there to stop highway criminals who are pouncing on travellers everyday,” he said.
Tourism promotion authorities earlier this year engaged the police over the same matter arguing that the roadblocks had become an obstruction to the tourism industry.
President Robert Mugabe has also demanded a balance between the need to protect the security of the country and promotion of tourism.
Zimbabwe received 2.1 million visitors in 2015 and is targeting to reach 5 million, bringing in 5 billion dollars in tourism revenue, by 2020.
Police have defended the high number of roadblocks saying that they are there for security reasons and also serve to reduce road carnage.Advertisement