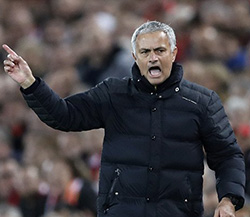 UK: Manchester City striker Sergio Aguero was partly to blame for getting Marouane Fellaini sent off, said Manchester United manager Jose Mourinho after the two fought out a 0-0 draw in the Premier League on Thursday.
Belgian midfielder Fellaini was red-carded by Martin Atkinson for headbutting Aguero six minutes from time after the City star got to his feet having just been fouled by the United player.
Mourinho conceded some of the fault lay with Fellaini but added Aguero was savvy enough to exploit the headbutt.
“I didn’t watch the Fellaini incident on TV but I spoke with Fellaini,” he told Sky Sports.
“He thinks it was a red card because he is Fellaini. I spoke to Martin (Atkinson, referee) – he thinks it was a red card.
“I can guess it’s a bit of a red card and a bit of a very smart, very experienced Argentinian player.”
Aguero’s failure to score – his nine shots the most against United since Cristiano Ronaldo’s 11 for Real Madrid in March 2013 – reflected a match where City played most of the football but lacked the killer touch.
The shared points left City occupying the fourth and final Champions League spot with United in fifth a further point back.
However, both have a game in hand on third-placed Liverpool who are just two points clear of United.
City manager Pep Guardiola – due to finish a season trophyless for the first time in his managerial career – admitted every one of their remaining league games would be like a final
“We cannot forget which team we were against tonight,” Guardiola told the BBC.
“They created two clear chances and I am satisfied. I know how difficult it is to play against Manchester United.
“Every game until the last game now will be a final. We have the talent but it’s not easy with so many players behind the ball.
Mourinho, whose side extended their unbeaten run to 24, laid into his midfielders for not providing the quality ball Marcus Rashford could feed off and while not naming him bemoaned the absence of Frenchman Paul Pogba.
“They started strong, pushed hard and I promised not to speak about players who weren’t playing so I won’t but we just didn’t have the quality of players in midfield – we were missing quality there.”Advertisement