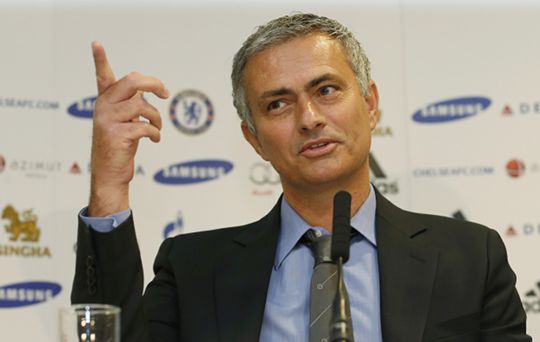 English soccer’s biggest club seem to have secured the services of the sport’s most colourful manager after Jose Mourinho, according to Sky TV reports, agreed personal terms with Manchester United on Tuesday.
After a trophy-laden career with Porto, Chelsea, Inter Milan and Real Madrid, Mourinho is set to replace Dutchman Louis van Gaal, who was sacked on Monday, with a remit to bring back the glory days the club once took for granted under Alex Ferguson.
The 53-year-old, sacked by Chelsea in December seven months after winning his third Premier League title at the London club over two spells, had been constantly linked with the United job as Van Gaal struggled to make an impression at Old Trafford.
The Dutchman was dismissed two days after steering United to their first FA Cup success in 12 years when they beat Crystal Palace 2-1 after extra-time in Saturday’s Wembley final.
Van Gaal’s preferred possession-dominated playing style at a club more readily associated with fast, direct attacking, was widely criticised, and it appeared to take his players time to adapt.
Mourinho is also known for pragmatism, however, relying on a strong defensive foundation and hard-working midfielders and strikers.
He has a history of success wherever he has managed and a proven track record in the English game.
Mourinho won the Uefa Cup and Champions League as well as the domestic double twice in his two seasons at Porto and led Chelsea to their first top-flight title in 50 years in his first campaign, retaining it the following season.
He also won the League Cup and FA Cup before moving to Inter where he won Serie A as well as the Champions League and Italian Cup.
Mourinho helped Real to their first La Liga crown in four years and on returning to Chelsea, he again won the Premier League before an unexpectedly poor — and troubled — start to the 2015-16 season led to his sacking.
DIVIDED OPINION
His imminent appointment at Old Trafford, touted in the media for months, will divide opinion but while some have voiced concern over playing style and potentially explosive personality clashes, he is widely considered to be as close to a guarantee of silverware as a manager can be.
The challenge will be not only to deliver success but to do it in style.Advertisement

Van Gaal’s FA Cup triumph was not enough to allow him to see out the final year of his contract on the back of a season in which the club’s fans routinely voiced their frustration with the safety-first football being served up.
Mourinho is not known for throwing caution to the wind but fans will hope that under his leadership United will at least not again be ranked top in the Premier League for the number of backwards passes made as they were under Van Gaal.
There will also be pressure for the new man to continue the good work of his predecessor in bringing young players such as Marcus Rashford and Jesse Lingard to the fore, something else Mourinho has singularly failed to do at most of his previous clubs.
However, after three seasons without a league title and with no Champions League football for a second time in three years, the United hierarchy are evidently prepared to accept potential downsides if the ‘Special One’ gets the club back to what they consider to be their rightful place at the sport’s top table.
Former Old Trafford goalkeeper Peter Schmeichel believes the Portuguese “could save” the club while Hull City manager Steve Bruce, who used to play in front of the Dane in central defence, said the chance to bring in Mourinho was “too good to miss”.
Former Chelsea manager Carlo Ancelotti, who will coach Bayern Munich next season, said Mourinho would be a “fantastic signing”, adding United had “lost its identity this last year”.
Former Old Trafford great Eric Cantona, however, said his old team should have gone for incoming Manchester City manager Pep Guardiola instead, saying he “loved” Mourinho but that his style of play is “not Manchester United”.
Retired Dutch international Ronald de Boer believes Mourinho is “similar” to Van Gaal in being a “workaholic” who “prepares perfectly on how to win”.
De Boer, who worked with Van Gaal at Ajax Amsterdam and with both men at Barcelona, said of Mourinho: “Sometimes it is not pretty but he knows how to grind out wins. That is what you get”.