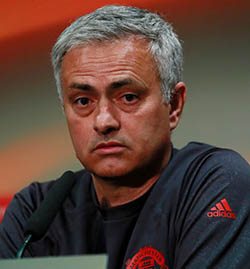 ENGLAND: Manchester United manager Jose Mourinho suggested rival coach Pep Guardiola isn’t telling the truth in making David Silva a doubt for Manchester City ahead of the derby.
Guardiola said Silva was injured against West Ham on Sunday and that “I don’t know if he is able to play on Sunday” against United.
Mourinho is wary of believing Guardiola, given that Arsenal manager Arsene Wenger ruled Alexandre Lacazette out of last weekend’s match against United only to start the striker.
“Our opponents have all these issues. They have a big issue but, in the end, everybody is ready to play,” Mourinho said after United’s 2-1 win over CSKA Moscow in the Champions League. “They have phenomenal organizations. We are a bit more humble.
“When we have a problem, we have a problem. When players are injured, they are injured. I tell you the truth.”
Moments later, Mourinho told reporters Eric Bailly would miss the derby through injury, that Phil Jones, Marouane Fellaini and Zlatan Ibrahimovic could return, and that Nemanja Matic “is injured but will play for sure. I am telling the truth.”
“No stories of Lacazette, David Silva,” Mourinho added as he walked out of the room. “All the truth.”
Speaking earlier Tuesday in Ukraine ahead of City’s Champions League match against Shakhtar Donetsk, Guardiola was asked for further clarification on the nature of Silva’s injury but was unwilling to elaborate.
“Hopefully he can be fit for Sunday,” Guardiola said, “but it was too risky to play him (on Wednesday).”Advertisement