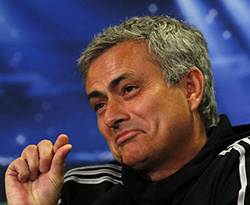 JOSE Mourinho has warned Chelsea fans the days of record signings arriving at Stamford Bridge are over – and says Financial Fair Play regulations have given rivals like Manchester United an advantage.
Mourinho’s claims, made in his capacity as Yahoo’s Global Football Ambassador, are a recognition that with UEFA’s financial regulations hitting hard, Chelsea can no longer afford to shop at the very top of the market.
A club which has twice broken the British transfer record in the past eight years when signing Andriy Shevchenko for £30.8m and Fernando Torres for £50m is now unable to compete with the superior income of the very biggest clubs.
Mourinho says Chelsea’s profile has changed from a buying club to that of a selling club, having to raise money for purchases such as £30m Cesc Fabregas and Diego Costa this summer by flogging off other members of their squad.
Asked by Eurosport-Yahoo if Chelsea would be able to break the British transfer record, set at £59.7m after Angel Di Maria’s move to United, Mourinho replied: “Chelsea not, for sure, because Chelsea is working in relation to the Financial Fair Play.
“We are making money to be able to spend money. In every transfer window Chelsea is losing players, is selling players.
“In the winter one we sold Mata; in the summer one we sold David Luiz and Lukaku.
“So Chelsea in this moment is not a spender – Chelsea in this moment is making more money in transfers than the money we spend.”
Mourinho was one of the first beneficiaries of Roman Abramovich’s billions as he replaced Claudio Ranieri as manager in 2004 and relied on the Russian’s vast resources to build a squad which won two league titles, the FA Cup and two League Cups in his first spell in charge at Stamford Bridge.
But with Chelsea’s commercial income not comparable to Europe’s very biggest clubs, he believes UEFA’s decision to implement FFP will only ensure the ongoing supremacy of a select group of European teams – a group that does not include Chelsea.
Mourinho, though, says Chelsea are enthusiastic about the challenge FFP presents to them, and are happy to be living within their means.
“When UEFA decided for Financial Fair Play they were trying to do this to make every team (have) equal possibilities,” he said.
“But the reality is that the big teams, the big clubs, the clubs with more years at the top with more fan base around the world, with more income, are the players that keep being the big spenders.Advertisement

“So Real Madrid, Barcelona, Bayern, Manchester (United) – all these huge teams, I think they have an advantage.
“But at Chelsea we are so happy with the way we are doing things, with this great balance between the income and the money we can spend.
“We are so happy with that profile of club we are, we don’t want to change.”