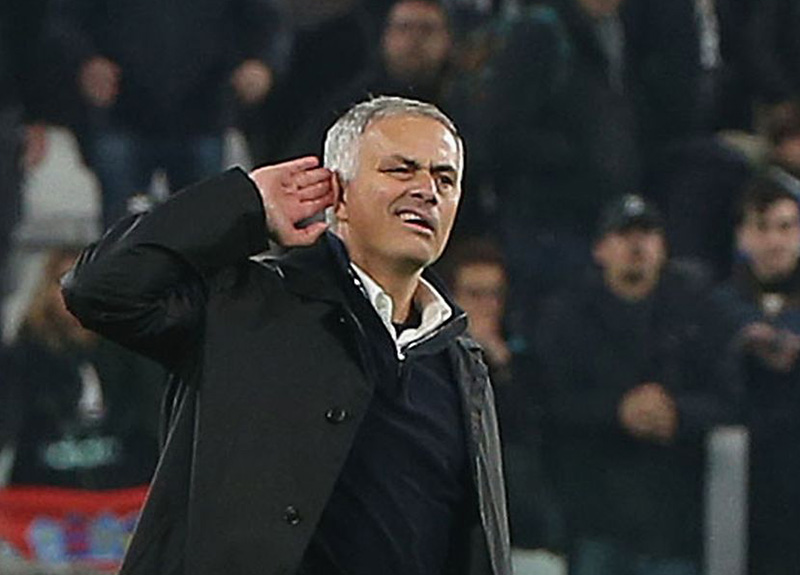 Mourinho’s side snatched a vital Champions League victory in Turin thanks to two goals in the last four minutes.

Trailing to a superb strike from former United star Cristiano Ronaldo, the visitors hit back thanks to Juan Mata’s fine free-kick before Leonardo Bonucci’s own goal clinched the points.

Mourinho responded in typically controversial fashion as the United manager marched onto the pitch at the final whistle with his hand cupped to one ear.

“In a beautiful Italian city, they insulted me for 90 minutes. I didn’t insult them. I just made a little thing,” he told BT Sport.

“I know the millions of Inter fans are happy with that. But I respect Juventus, their players, the manager, the quality they have.”

The gesture was meant to ask the Juventus fans why they were no longer taunting him, as they had throughout the game to reference to his time as manager of their rivals Inter Milan.

Mourinho had also clashed with Juventus in the reverse fixture at Old Trafford when he held three fingers up to away fans, in reference to the treble he won with Inter in 2010.

Bonucci was furious and confronted Mourinho, who was quickly escorted down the tunnel by a member of United’s backroom staff before the explosive situation could escalate.

However Juve coach Massimiliano Allegri played down the controversy.

“Everyone has their own personal reactions and how they celebrate. I can’t say whether he’s right or wrong,” he said.

United’s thrilling fightback was the perfect response to the taunts from Juventus as Mourinho’s men put themselves back on track to qualify for the last 16.

Mourinho was delighted with the way United recovered from falling behind to Ronaldo’s sublime second half volley in a comeback that echoed their famous 1999 Champions League final win over Bayern Munich.

“We performed at a high level. After the goal we had five minutes to wake up again. We were there from the first minute until the last,” he said.

“It is a big victory for us, not just because we needed the points but because it was away from home against an amazing team.

“They are a fantastic team with an amazing record at home. We had to come and not feel inferior. They have more potential than us. Everybody knows their ambitions.”

United, second in Group H, could book their place in the knockout stages if they win their next group match against Young Boys, depending on the result of Valencia’s match against Juventus on the same night.

“We thought we had two finals to play. Now we have one final at home to Young Boys,” Mourinho said.