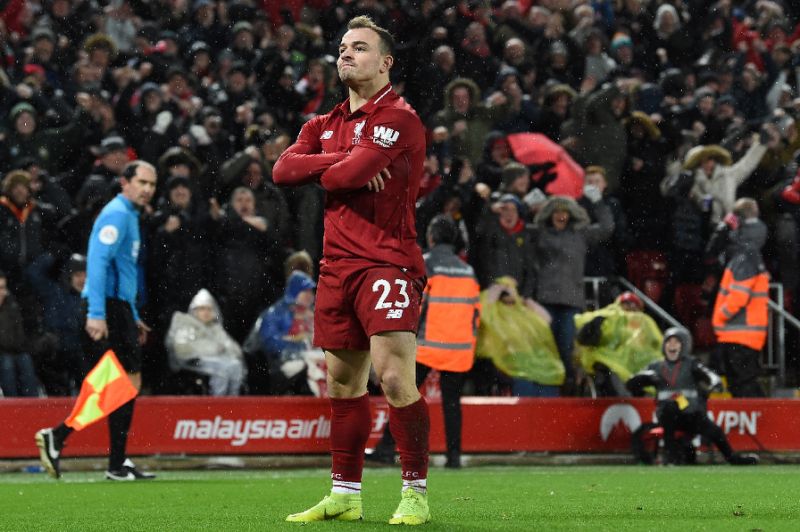 Jose Mourinho hinted Manchester United’s players are simply not good enough to compete with Liverpool after being brushed aside 3-1 at Anfield on Sunday by the Premier League leaders.

Mourinho claimed ahead of the game that Liverpool have had luck on their side this season, but while there was fortune in substitute Xherdan Shaqiri’s two deflected strikes in the final 17 minutes, the visitors did not deserve anything more than a fifth league defeat of the season.

“They (Liverpool) are fast, intense, aggressive, physical, they play 200 miles per hour with the ball and without the ball.”

Mourinho also turned on his players’ injury record after having to name a patched up defence with Eric Bailly replacing Chris Smalling at the last minute after the latter picked up an injury in the warm-up.

However, there will be little sympathy for the Portuguese’s protests as he left £89 million signing Paul Pogba on the bench for the full 90 minutes, while £50 summer recruit Fred didn’t even make the squad.

Victory took Liverpool back a point above Manchester City and a mammoth 19 clear of United, who remain in sixth and are now 11 points off the top four.

However, Mourinho insisted United can still qualify for next season’s Champions League.

“I know that we lost some other matches but we played Liverpool, Chelsea and Manchester City away, probably the three best teams apart from Tottenham,” he added. “I think we have more possibilities to do more points in the second half of the season than the first.”

The contrasting form showed by both sides this season continued as United strained to keep a rampant Liverpool at bay and were only level for so long thanks to a huge error by home goalkeeper Alisson Becker.

“You (the media) didn’t say too many nice things about them and good things about us. It was made for another result. We wanted to avoid that and we fought really hard,” said Liverpool manager Jurgen Klopp.

Liverpool laid siege to the visitors’ goal early on with David de Gea stretching to keep out a low drive from Roberto Firmino, Ashley Young clearing off the line and Fabinho firing wide from the edge of the box.

“A brilliant start. One of the best performances we’ve had since I’ve been at Liverpool,” added Klopp. “The first half an hour was outstanding.”

Only City have kept Klopp’s side from scoring in the Premier League this season and a United defence that has kept just one clean sheet in the league since September never looked capable of holding out like they had in their two previous visits to Anfield.

Mourinho’s men were finally breached when Mane controlled Fabinho’s chipped ball into the box on his chest and volleyed past the onrushing De Gea on 24 minutes.

However, Liverpool’s momentum was punctured by an Alisson gift 12 minutes before the break.

The Brazilian was Liverpool’s hero with an injury-time save to secure the Reds’ place in the last 16 of the Champions League against Napoli on Tuesday.

But he spilled Romelu Lukaku’s simple cross into the path of the grateful Lingard to bundle the ball into an unguarded net.

The second half followed a similar pattern but it wasn’t until Klopp turned to Shaqiri 20 minutes from time that Liverpool found a way through.

Three minutes later De Gea did well to prevent Ander Herrera turning Mane’s cross into his own net, but the ball fell for Shaqiri and his effort cannoned off Young and in off the underside of the bar.

Shaqiri got lucky again with 10 minutes to go when, this time on his favoured left foot, his shot flicked off the diving Bailly to leave De Gea helpless.