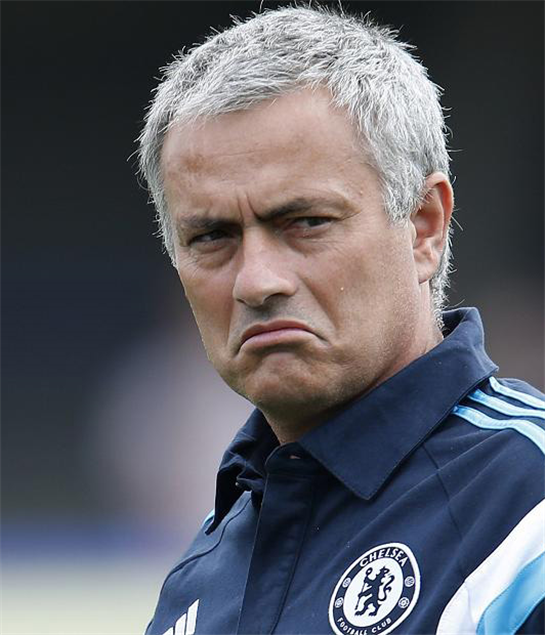 JOSE Mourinho enters the international break with his future as Chelsea manager under closer scrutiny than ever before following his team’s 1-0 defeat at Stoke City.
The outspoken Portuguese was not even present at the Britannia Stadium on Saturday as he served a one-match stadium ban for his verbal onslaught on match officials during the recent defeat at West Ham United.
But as he watched Chelsea’s attempts to find an equaliser fizzle out on television at the team hotel, he will have known that two weeks of intense speculation and analysis now await him.
It is the first time in 16 years that Chelsea have lost three consecutive league games and billionaire owner Roman Abramovich has never seen such a sequence in his time as owner of the London club.
The three coaches who stood in for Mourinho — Steve Holland, Silvino Louro and Rui Faria — declined to speak to the media after the game, which left the champions in 16th place after seven defeats in 12 games.
But goalkeeper Asmir Begovic insisted that the club’s players remain firmly behind the 52-year-old Portuguese, as do the supporters who chanted his name throughout the game.
“That is out of our hands. We are behind the manager. You can see that from our performances,” said Begovic when asked about the manager’s future.
“We think he is the right man and someone we work hard for.
“Jose did the pre-match talk at the hotel and that was it. We wanted to get a result for him. His spirit and his presence is always there.”
Mourinho’s opposite number Mark Hughes, whose team knocked Chelsea out of the League Cup in a penalty shoot-out last week, admitted that overseeing a game against a dug-out without a manager was a first for him.
“It’s difficult to say whether it made a difference,” said Hughes. “But it’s a rare occurrence when the opposition manager isn’t standing there. I’ve not experienced it before.”
Tries to bully you
He added: “Most of your work is done at half-time. Sometimes you can affect it in the correct manner. It’s dependent on the manager. A manager like Jose, yes, they would have missed him, giving him credit for his standing.
“They’re going through a surprising period for them, but not for anybody else. I read words from Jose this week saying maybe the top teams will lose more games this season.Advertisement

“The middle group of teams in the Premier League are a challenge for the top teams this year and I have to agree.”
Hughes also praised Chelsea substitute Loic Remy, who chose not to go down in search of a penalty despite Stoke goalkeeper Jack Butland hurling himself at his feet late in the game.
“Credit to Remy at the end, he didn’t look for a penalty,” said the Welshman.
“Time and time again you see Premier League players leaving a leg behind them just to get contact, but he didn’t do that.
“He hurdled Jack and looked to score a goal when he could have been more cynical and looked for a penalty.”
Mourinho was given a further headache after the game when it emerged that a Stoke steward had accused Chelsea striker Diego Costa of deliberately treading on his foot as he looked to retrieve the ball for a throw-in.
Costa was involved in a running battle with Ryan Shawcross throughout the game, but the Stoke skipper said he relished the tussle.
“Diego Costa is a great striker and is always going to give you a challenge,” Shawcross said. “It’s brilliant for me to play against a player like that. It’s the kind of match I like.
“He’s old school, in your face and tries to bully you. He’s always on the line, but to keep him quiet is a great performance from all of us. You have to stand up and be tough to beat.”