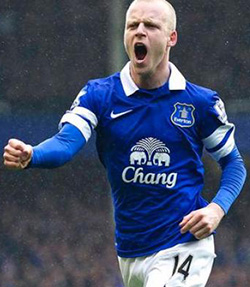 A DEFIANT Jose Mourinho said he was the man to salvage Chelsea’s season after the champions crashed to a 3-1 defeat at Everton on Saturday, their third defeat in five Premier League games.
Everton’s hero was substitute Steven Naismith who scored the “perfect” hat-trick with a header and shots with his right and left foot as Everton condemned Chelsea to their worst start to a top-flight campaign since 1986.
The champions have lost as many games as they did in the whole of last season, but Mourinho told BT Sports he was not panicking.
“The results are too wrong for our quality and our status and the players deserve much more than they are getting,” he said.
“Right now it’s easy for everyone to criticise me and the players that everything is wrong, but I completely disagree. I am the champion, the players are the champions.
“The way we are playing is not as bad as the results suggest because everything is going against us.
“But I don’t blame the players and I don’t blame myself. They are the worst results ever in my career but I am comfortable with the situation.
“I do not think there is a better manager than me to come to Chelsea and to do my job. I am the man for the job.
“I have done so many good things for Chelsea, but now I am the man with the bad results, but give me the responsibility and I will sort this out.”
Everton manager Roberto Martinez was delighted with his players.
“A performance like that makes you very proud, it was an incredible team performance,” he said.
Naismith was linked with a move to Norwich before the transfer window closed last week.
“Today was my chance and I managed to take it,” the Scotland forward said.
Naismith replaced the injured Mo Besic and headed Everton in front in the 17th minute to complete a 19-pass move that cut Chelsea to ribbons.
The Scotland forward doubled the lead with a low left-foot shot before Nemanja Matic brought Chelsea back into the game with a superb 25-metre strike nine minutes before halftime.
Chelsea failed to build on that goal, however, and Naismith wrapped up the points with another well-worked goal after 83 minutes when his right-foot shot beat keeper Asmir Begovic who was replacing the injured Thibaut Courtois.Advertisement