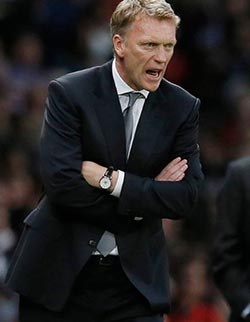 AHEAD of their eagerly anticipated clash at the weekend, Jose Mourinho has dismissed claims that David Moyes is under pressure at Manchester United.
Moyes has struggled in his first season at the helm at United as they lie in seventh place in the Premier League, 11 points off the pace at the top of the table.
Despite his positive comments in support of Moyes, he does believe that United are now out of the title race due to the gap between themselves and Arsenal.
Speculation has begun to question whether Moyes can hack it at Man United and if the club is starting to feel a mistake was made in hiring him, but Mourinho doesn’t believe he is under that sort of pressure.
He told the Evening Standard:  “I don’t think David is under pressure. The pressure is something virtual. It is something that comes from the media as a consequence of not having the best results.
“The most important thing in all of this is not the pressure that comes from the outside, it’s the reality of the inside.
My feeling, which is based on years of communicating with Sir Alex and some inside information, is Man United are not happy, but they are calm. They trust David. David trusts them.
“Are the players blaming the manager and thinking ‘I am safe’? No. The players don’t feel that. They feel all together on this.
The manager is calm and they are thinking this is our manager for the next two‑three-four-five years. So they’re all together and are going to rebuild again a big team.
“The bad results will finish. They will get back on track, probably too late to win the League because they’re too many points behind the leader.
“The gap is difficult to recover but David has a fantastic job. He’s in probably unique conditions to be stable and to do his work well and achieve success sooner rather than later.”
Alex Ferguson won 28 trophies in his 26-year reign meaning Moyes was always going to have a difficult task when taking over.
“The point is not sympathy or talk about the incredible task he inherited in replacing Sir Alex. I think David has a fantastic situation.
“He is in a special club with a special philosophy and a special understanding of what is the importance of the manager, a fantastic understanding of the time a manager needs to give his best and to transform his squad and to make his team.”Advertisement