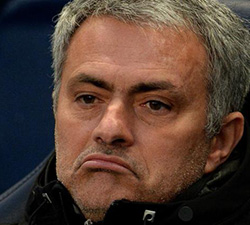 CHELSEA manager Jose Mourinho said he wanted to stay out of trouble but he may find himself in it anyway after watching his side go down 5-3 at Chelsea.
A clearly agitated Mourinho saw his Barclays Premier League leaders concede five for the first time under his management at White Hart Lane, just days after losing his cool at Southampton.
Then he said there was a “campaign” against his men after seeing them denied a penalty at Southampton – a game they drew 1-1.
On Thursday, despite the heavy defeat, he had issues with Phil Dowd, seemingly relating to a handball by Jan Vertonghen when his men were 1-0 up.
No decision came and Tottenham then ran riot, while Mourinho was upset on the sidelines when Federico Fazio and Eden Hazard collided. Hazard later told Mourinho there was no foul, but that did little to temper his mood.
Initially, when asked if he had any arguments on BT Sport, he said: “Why do you ask? You know first of all I don’t want to be punished.
“I want to be here for the next match, so I prefer just to say we lost, tomorrow is another day and Sunday another match and that was all.”
Asked if the “campaign” was at work, he added: “That is a question I don’t want to answer.”
Mourinho then assessed his side’s defending, before drifting back on to the subject of Dowd.
“I think we made some defensive mistakes, some individual defensive mistakes; it was not easy for my defenders to cope with a good (Nacer) Chadli and especially a good (Harry) Kane. But it was also very difficult for Tottenham defenders to cope with amazing Hazard and a good Diego Costa.
“You can speak about the result, focus on the result and the important moments of the game, and I prefer just to focus on the result because if I focus on the crucial moments of the game you know what I have to say because you have exactly the same opinion as I have. You know at a crucial moment of the game, a result could go for 2-0.”
Asked if he wanted to say any more, he said: “I don’t.”
But he then added: “We did (keep at it). (Hugo) Lloris made an amazing save for 4-3, we tried, the players tried a lot.
“There is an action on Eden Hazard; Hazard honest as always tells me in his opinion it was not a foul or a red card, so that’s good, in spite of Mr Dowd is too slow to go with that ball, he was like 40 yards away, he made the right decision.Advertisement

“The decision (that) was like 10 metres away, he couldn’t make and that’s a decision that is the crucial moment of the game.”
Mourinho then said: “Every game is unpredictable but there are things in the game that are becoming predictable.”
When asked what, he replied: “Forget it.”
Chelsea were tipped by some to go unbeaten this season, but have now lost at both Tottenham and Newcastle.
With one final comment, Mourinho said: “Of course I hate to lose but again I prefer to lose like I did against Newcastle with a brilliant performance by (referee, Martin) Atkinson, an unlucky performance by us, a lucky performance by Newcastle, but a game where you lose because it’s football, a different feeling.
“We have important Christmas gifts in the last two matches, the gifts that people in love with football don’t like.”