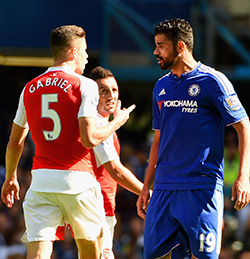 CHELSEA manager Jose Mourinho renewed his war of words with Arsenal’s Arsene Wenger after the reigning champions defeated their north London rivals 2-0 to kick-start their spluttering season on Saturday.
In an outburst that underscores the animosity between two of English football’s top coaches, Mourinho reacted testily after Wenger had criticised referee Mike Dean.
The referee infuriated Wenger after he failed to sanction Chelsea’s controversial striker Diego Costa but sent off two Arsenal players in a bad-tempered London derby.
Television replays showed the intimidating Brazil-born Spaniard pushing Laurent Koscielny in the face during tussles in the Arsenal penalty area in the first half.
“I think it’s unacceptable what he does to Koscielny. He pushes him down, he hits him in the face. I do not understand Mike Dean’s decision at all.
“Why does Diego Costa stay on the pitch and Gabriel is sent off?” Wenger said at his post-match briefing.
He added he felt Costa always acted belligerently and often got away with it.
“He will do the same next week and it’s always the same, he is always provoking.”
Wenger conceded that Gabriel deserved his red card for kicking Costa in a melee of protesting players at the end of the first half.
“Gabriel is guilty for getting involved of course he should not have reacted at all,” he said.
“We expected that kind of game. We were not surprised but I expect the referee to make the right decision.”
Wenger also suggested the foul that led to Chelsea’s first goal, headed home from a free kick by centre back Kurt Zouma in the 53rd minute should not have been given.
“It was hardly a touch,” he said.

Arsenal’s woes were compounded when Santi Cazorla was sent off after a second yellow card in the 79th minute leaving Arsenal vulnerable to Eden Hazard’s stoppage time strike that took a deflection off Arsenal substitute Calum Chambers wrong-footing former Chelsea keeper Petr Cech, playing for the opposition for the first time after his 11-year career at Chelsea.
But Mourinho hit back saying, “I’ve played against Arsenal I don’t know 12, 15, maybe 18 times… and only once he didn’t moan,” the Portuguese coach said, referring to Arsenal’s victory over Chelsea in the pre-season Community Shield game in August.Advertisement

“And on that day we lost the game, we lost a cup, it was not good for us. We behaved in a fantastic way, no excuses, no crying, not moaning,” Mourinho said.
“I have to cope with my defeats. Tonight he has to cope with his defeat.”
Mourinho, who has not lost to Wenger in 11 encounters in the Premier League, said Arsenal had lost their heads in the intensity of the London derby.
“Every derby, you don’t win without emotional control,” he said, adding he’d always passed that message to his players when coaching in Spain, Italy and Portugal as well as England ahead of matches against title rivals.
Mourinho gave his backing to Costa when asked whether the Spain striker should have been more severely punished after he put his hands in the face of Arsenal defender Laurent Koscielny, sparking a fracas that ended with Gabriel’s dismissal.
“If you want to speak about Diego Costa with me, it’s just to say he played like he has to play and that’s why you have full stadiums, you sell to television around the world for millions and millions because the game has to be played like that,” Mourinho said.