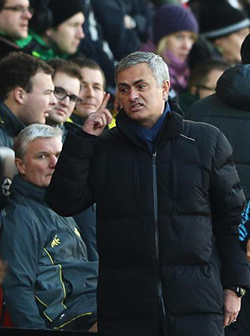 SADIO Mane and Eden Hazard scored in an entertaining, hard-fought 1-1 draw at St Mary’s on Sunday, but afterwards the Blues manager’s Jose Mourinho focus was on what he believes is a growing movement against his side.
Chelsea have found themselves at the heart of the simulation debate in recent weeks, with Diego Costa and Willian booked for supposedly taking a tumble in the win against Hull – after which Steve Bruce compared a Gary Cahill dive as “like something out of Swan Lake”.
The west Londoners came under scrutiny again on Boxing Day when Branislav Ivanovic appeared to take a tumble against West Ham – the kind of incident Mourinho believes is being wrongly hammed-up and denied his side three points at St Mary’s.
Fabregas looked to have won a penalty early in the second half after being caught by Saints teenager Matt Targett, yet referee Anthony Taylor instead deemed it a dive and booked the infuriated Spanish midfielder.
“In other countries where I worked before, tomorrow in the sports papers it would be a front-page scandal because it is a scandal,” Mourinho said of the yellow card.
“I think it is a scandal because it is not a small penalty – it is a penalty like Big Ben.
“In this country – and I am happy with that, more than happy with that – we will just say that it was a big mistake with a big influence in the result.
“I am happy that it is this way, with respect for the referee. He made a big mistake like I make, like the players make sometimes.”
Asked if recent incidents involving Cahill and Ivanovic had been an influence, Mourinho retorted: “They are not incidents, they are not incidents.
“Of course [it has influenced the referee]. That’s a campaign, that’s a clear campaign.
“People, pundits, commentators, coaches from other teams – they react with Chelsea in a way they don’t react to other teams.
“They put lots of pressure on the referee and the referee makes a mistake like this. We lose two points, Fabregas earns a yellow card.”
Mourinho made those comments to the BBC and let loose again in the post-match press conference.
The Portuguese said this has been an issue since the first day of the season, when Costa was wrongly booked for a dive against Burnley, and called for a change to the system.Advertisement

“The double punishment is something unbelievable,” Mourinho said.
“Anthony [should go to a] screen, see that he has made a mistake – he is a good guy, an honest guy.
“He writes ‘I made a mistake, let’s clean the yellow card for Cesc’. It should be a simple process.”
Southampton manager Ronald Koeman understood the anger of his former Barcelona colleague, but philosophically concluded “it’s part of football”.
“If the referee thinks it’s simulation then you have to give the player a yellow card, but you will have always the decision if it’s simulation or really a fault in the box,” he said.
“I have to watch that moment in the game because maybe for Chelsea that was an important moment to win the game.”
It was a moment which allowed Saints to show an impressive resilience, denying the Blues a winner which at times seemed imminent.
“Of course, one point against Chelsea is maybe three points against another opponent,” Koeman said.
“I am proud of the players, the organisation in the team, the spirit in the team. We knew it would be very difficult but the boys did it fantastic.
“Of course we passed some difficult moments in the game.
“I was a little bit disappointed at half-time because we conceded before half-time, but we stayed organised in the team.
“We got a little bit of lucky but you need that against these good teams to get a result.”