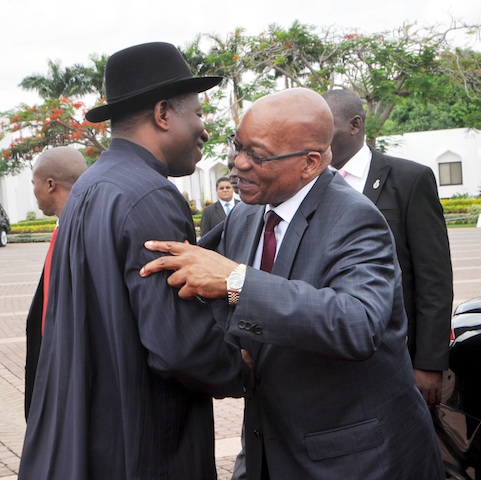 FOR years South Africa has asserted itself as Africa`s most dominant economy, frequently being touted as the world`s gateway into Africa. However, its anaemic growth in recent times has seen other African countries rise to the pinnacle of the continent’s economic landscape. At a time when six of the world’s ten fastest growing economies in the last decade have been in Africa averaging around 7 percent GDP growth, South Africa has only managed a miserly GDP growth rate of around 3.9 percent over the same comparable period. The growing inequalities between the rich and the poor, labour unrests, service delivery protests and corruption among a range of other ills have hampered South Africa’s progress.
Enter Nigeria, Africa`s most populous country with over 160 million people and whose GDP has grown at an average of 6 percent since 2006 according to the World Bank. Nigeria’s rapid growth over the years appears to have attracted noteworthy foreign investments as witnessed by global giant Procter & Gamble’s recent $300 million manufacturing plant, the Dubai-like Eko Atlantic City being built on land reclaimed from the Atlantic Ocean among other foreign investments.
Nigeria’s Statistics Bureau, on the 6th of April, announced its revised GDP figures which estimated the size of Nigeria`s economy to around $510 billion, reflecting an 89 percent increase in the size of its GDP. This came after the process of recalculating Nigeria`s Gross Domestic Product to better reflect the country’s changing economic configuration over the years. The recalculation, called rebasing, accounted for changes in market prices and weights of goods and services, and also saw the base year of GDP calculation change from 1990 to 2010.
Nigeria’s mobile telecoms industry as well as the entertainment and filmmaking sectors saw their weighting increase, in tandem with their significant contribution to Nigeria`s economic output. The last rebasing exercise in the West African country was carried out some two decades ago in 1990. Nigeria`s GDP rebasing saw it climb to 24th position on the list of the World’s biggest economies by GDP, ahead of countries such as Belgium and Taiwan.
The country has set itself an ambitious target of becoming one of the world`s top 20 economies by 2020 and has been second only to China in terms of cumulative real GDP growth in local currency terms since 2008. Jim O`Neill, economist at Goldman Sachs and famous for coining the acronym BRIC, has now shifted attention to what he terms the MINTs, Mexico, Indonesia, Nigeria and Turkey which he sees as the  pillars of global growth in the coming years, with Nigeria being the most prominent among them.Advertisement

Accounting for $5,5 billion of the Foreign Direct Investment into Africa in 2013 alone, clearly Nigeria is in good stead to be one of the leading economies with time. On the surface this makes for some scintillating reading. However, a closer look at the dynamics of Nigeria`s economy reveals structural deficiencies that are overlooked by GDP figures as indicators of economic growth and development.
Military Extremism in the North
Nigeria has had to contend with threats posed by Boko Haram as well as other Islamist militant groups for a while. The Muslim North has been the area most affected by the activities of these extremists, perhaps the most antagonistic of them being Boko Haram. It is estimated that since 2002, the group which has been proscribed as a terrorist organisation by most foreign governments, has accounted for over 10,000 deaths in the region.
Often, it is argued that the unemployment, lack of education opportunities, poverty and socio-economic inequalities rife in the northern parts of the country provide a steady supply of youths who can be recruited into the radical organisation. The consequences of such extremism on the country have been all too apparent, ranging from kidnappings, bombings and assassinations. In May 2013, the Nigerian President declared a State of Emergency on three states in the northern parts of the country as part of efforts to thwart insurgents.
This could potentially be a self-perpetuating cycle where the northern parts of Nigeria, because of the instability, fail to attract investment thereby further entrenching roots of income inequalities and under development compared to the oil rich south. This extremism is more than just about religious pursuits to impose Sharia Law. Commenting on Boko Haram and their activities, Femi Odekunle Professor of Criminology at the University of Abuja says, “The government needs to address the social order issues which constitute economic and educational issues that are underlying the emergence and sustenance of Boko Haram.”
As long as wealth and opportunities remain or are perceived to be concentrated in the Southern states with the oil refineries, it is not immediately conceivable how the terror caused by militant groups in the North will abate. The costs of such insurgents on the economy are too dear, and could all but reverse strides made in developing Nigeria.
Corruption, ‘the in elephant room’
Recently, Nigeria has made the headlines with high profile cases of corruption. From allegations by former Central Bank governor Lamido Sanusi of $20 billion being unaccounted for by the State, to senior government ministers being sacked, reportedly for corruption. Clearly corruption is rampant in Nigeria. Transparency International`s Corruption Perceptions Index ranks Nigeria at 144 out of the 177 countries measured, underlining the extent to which corruption is endemic in Nigeria.
Nigeria`s Finance Minister, Ngozi Okonjo-Iweala who in her book ‘Reforming the Unreformable: Lessons from Nigeria’, dedicated an entire chapter to corruption, concedes that Nigeria indeed has a problem with corruption. However, she like other members of President Goodluck Jonathan’s government, with haste, downplays the problem. Speaking to Christiane Amanpour, CNN`s chief international correspondent, Dr Okonjo-Iweala says “Nigeria does have a problem with corruption and so do many other countries, including developed countries.”
To be fair, corruption is not only peculiar to Nigeria, and notable strides have been made to try to stamp out graft in that country. Yet, corruption could see incomes remain unevenly distributed in a country where the World Bank estimates that 67% of the population still live in poverty. Former Executive Chairman of Nigeria`s Economic and Financial Crimes Commission, Nuhu Riabadu revealed that since independence in 1960, Nigeria has lost close to $380 billion to corruption and mismanagement. Corruption then is the ‘elephant in the room’ which the country has to address if these statistics are anything to go by.
Structural Economic Issues
On a broader level, Nigeria`s economy is laden with structural issues that threaten the growth it has been witnessing. 80 percent of the country`s revenues come from crude oil exports and this signifies an undiversified economy reliant on the oil and gas sectors that are susceptible to the caprices of fluctuating commodity prices. This speaks to the obvious need to diversify Nigeria`s economy.
Furthermore, growth in the Nigerian economy has been in less labour intensive sectors such as oil and gas, telecoms and banking. As a result, not everyone enjoys the growth of the economy as most people remain unemployed. Agriculture, which can potentially employ many people, needs to be modernised and more employment opportunities created.
300,000 barrels of oil were reportedly lost in 2013 alone due to vandalism, production shut-downs and theft. These are the sort of leakages that will need to be addressed, as the country endeavours to develop. But the work does not stop there; together with Afghanistan and Pakistan, Nigeria remains one of only three countries where Polio is still present. Then there is the ‘paradox of plenty’, where an estimated 120 million people do not have access to electricity in Nigeria which is the largest oil exporter on the continent.
The clear implication is that investments have to be made in shoring up health care systems, ensuring efficient service delivery, upgrading key infrastructure in the country, propping up systems as well as ensuring that growth and development is equal. Nigeria’s demographic structure presents opportunities for an economy driven by robust domestic demand. Yet this hinges upon a growing middle class whose spending will drive the economy.
Though South Africa will likely remain the bell-weather economy in Africa for the foreseeable future due to its diversification, investments in infrastructure, its size and the systems it has in place, it is obvious that it has underwhelmed of late. With Nigeria`s national elections looming in 2015, it remains to be seen whether the new government will implement the much-needed socio-economic reforms and consolidate its new found position as Africa`s biggest economy.
In the mean time however, for the ordinary man walking the streets of Lagos or Abuja, there is very little to cheer about as, despite the GDP rebasing exercise, the standards of living still pale in comparison to other developed economies.