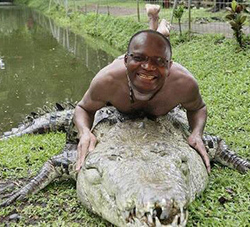 HE is the common denominator who has been a coup, a cause celebre and a cast-off. Professor Jonathan Moyo is a man who entertains yet divides.
A wise man once said, it is one thing to crack a joke, and another to look like one. When, Jonathan Moyo tweeted a near naked meme of himself riding a crocodile, under the theme, “Crocbustering” Zimbabweans generally and unanimously agreed that the learned Minister had traversed the line from joker to joke.
An adult man who has fathered 5 daughters is expected to behave in a manner befitting the dignity of a father. Much more is expected from a government minister who oversees a portfolio responsible for inculcating critical life skills into our nation’s youth.
There is a price to pay when grown men behave like children. An inane, needless and irresponsible post now condemns Moyo to a depiction he fondly uses against antagonists. Among others and on more than one occasion, he has described myself, Tito Mboweni and David Coltart as “idiots”. Paradoxically through his post, he has grabbed the very description that he loves so dearly, and anointed it as a befitting title of himself.
It is always a spectacle when the boomerang strikes the rascal. The embarrassment he had hoped to dish fell flat on his own head. Miscalculated mischief has backfired, and the educated Professor has painted himself into a corner. Where he sought to pull down the pants of his seniors, it was his trousers that fell off. He finds himself in uncharted waters, starring down the barrel of his favourite gun; “idiot”.
Moyo has a penchant to offend, and he does it often. It has been his greatest strength yet ironically it is now his Achilles heel. He attempted to smear, but he has become the stain. Yet, that might just be Moyo’s smallest problem.
As his malice unravels, his mistakes and cunningness have become obvious and will surely come at a greater cost. The picture was a clever pun in supposed mocking reference to Vice President Emmerson ‘Croc’ Mnangagwa, but the real target was President Robert Mugabe.
It is known and accepted that in traditional Shona kinship, Robert Mugabe’s house, bloodline and clan fall under the bracket totem classification of ‘Crocodile’. It may be the case that Mnangagwa is nicknamed, and known affectionately as ‘The Croc’, but it is brazenly clear that within the corridors of power, the real Crocodile is Mugabe. Even Moyo himself has said this before.Advertisement

In the game of politics, mistakes come at a huge cost, and sooner or later, treachery will catch up with the perpetrator. Moyo’s loud mouth has finally revealed a long suspected ulterior motive. It has always been whispered in the not so secret corridors of analysis that Jonathan holds a straightforward grudge against Mugabe for the murder of his relatives during the Gukurahundi massacres.
Several analysts and with probable cause have argued over the years that Moyo has always harbored an agenda to revenge and destroy Zanu PF from within. History makes it hard to argue against such an assertion. Professor Moyo rose to prominence as Mugabe’s fiercest critic, but he was bought out and became the mouth piece and think-tank of the former’s machinery. He is the enemy turned emblem, protester turned prodigy.
Moyo engineered his way into influential positions within the party from where he artfully sowed discord and endeavored to split Zanu PF and floor Mugabe. He has not done it unshaved. He was axed in 2005 following an attempt to oust Mugabe from within, in the famous Tsholotsho declaration. But, a Machiavellian mastermind with deviously brilliant ideas, he returned many years later, on bent knees and pled for forgiveness from Gushungo, who is well known for having a forgiving heart, especially towards those he has worked with.
On his second coming, he appeared reformed. He helped deliver an election victory for Zanu PF in 2013. He led an almost one-man march against corruption. He encouraged hitherto unseen honest journalism at state-controlled newspapers; he demanded corrupt politicians be exposed, even if they were from within Zanu PF.
Mugabe bought it, and Moyo seemed in cruise control, his deception unseen and consequently unchecked. As Mugabe tired, and battled ill health, Moyo overtly went back to his old ways. He had not changed one bit. When the President ordered that his cadres stop stirring damaging controversy on social media, all of them listened; Moyo did not.
He lowered his tone, but still made it a point to instigate hurly-burly in Zanu PF. He rode on double entendre, and innuendo. He knew he was safe, hiding behind jest, he could always claim innocence, and use the old age “my comments were taken out of context”. He had, till recently, managed to maintain his stealth and hide his intention fully well. But it seems as though Moyo will prove the engineer of his own exit. This time he has gone too far.
In 1999, Professor Moyo, while describing the President said, “His uncanny propensity to shoot himself in the foot has become a national problem…”. The spectacular oxymoron is that, in his talkativeness, it is him who has shot himself in the foot. His attempt to insult the Godfather has let his cat out of the bag. He has sold his mischief out. His obsession with embarrassing Mnangagwa has boomeranged, his obsession with insulting Mugabe has ricocheted. His head is on the line, and his reputation is gone. He has shot himself in the foot, twice. It is quite an incredible double oxymoron!
There seems something hubristic about the fall of an arrogant man and the sense is that the canny talker faces an uncertain future. Moyo finds himself trapped between unenviable options, he must either religiously insist that his insulting picture was meant for Mnangagwa, which in itself would be an admission of guilt for ‘being deliberately divisive’ and disobeying Mugabe, or he must admit that Mugabe was his intended target to begin with.
Neither option would save him. The scenario of Mugabe sacking Jonathan Moyo for a second time seems all too probable. An ignominious end to the artful dodger’s political career.
Maynard Manyowa is a political analyst and social commentator. He can be reached for feedback via his personal website, www.maynardmanyowa.com