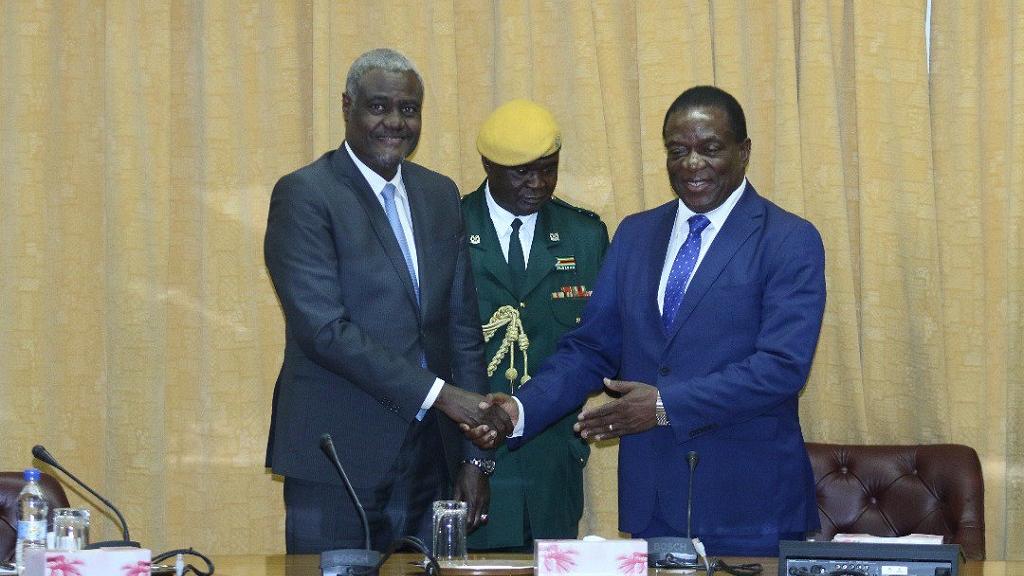 Mahamat, who is on a three-day visit to Harare, met President Emmerson Mnangagwa and cabinet ministers in Harare on Monday.

“The African Union was very happy about the peaceful transition as it was very peaceful,” Marmat said after meeting Speaker of Parliament Jacob Mudenda.

The AU diplomat was referring to last November’s controversial power transfer in Harare which saw long-time leader Robert Mugabe resigning under military pressure to be succeeded by Mnangagwa.

Marmat apparently expressed ignorance over a petition by the fledgling New Patriotic Front (NPF) party spearheaded by, among others, Zhuwao and ex-cabinet colleagues Jonathan Moyo and Saviour Kasukwuere.

Since the ouster of his uncle last November, Zhuwao and his allies have continued to campaign against the Mnangagwa government.

Through their NPF party, the exiled trio petitioning the AU and the regional SADC grouping to intervene and force a return to constitutionalism in Harare.

However, Mahamat said he was not aware of the petition.

“I am just learning from you now, I have not received any petition,” the envoy told reporters.

“The statement attributed to you is astonishingly baseless and, in fact, false,” said the former Zanu PF politician.

“More specifically, your statement is partial, and partisan given there is not record of your having interacted with affected stakeholders, including victims and families of those who were killed or tortured during the coup leading to the displacement of countless Zimbabweans both internally and externally.

“Furthermore, it is extremely disingenuous of you to claim ignorance of the petition sent to you by NPF on 29 January 2018 especially in light of the massive administrative and institutional infrastructure of the AU.”

Zhuwao insisted Mnangagwa rose to power on the back of a coup, adding that the AU needed to trigger its statutes and cut all diplomatic ties with the new Harare authorities.

Mugabe’s nephew further demanded that the AU deploys an intervention force in Zimbabwe to pave way for the establishment of a “transitional authority”.

“Your Excellency, please allow me to express my disappointment, as an African and a Zimbabwean, that the American Government has beaten African Governments to clearly articulate the objective reality that the regime in control of Government in Zimbabwe is a product of a military coup,” he said.

“However, that disappointment has been tempered by His Excellency President Cyril Ramaphosa extolling the virtues of the South African Defence Forces which stayed out of the recent change of political leadership in South Africa.

“In the circumstances, it is my hope and prayer that the reports attributed to you are erroneous because your position of legitimating a glaring military coup has dire consequences for legitimate and constitutional governance in Africa.”

To @African_Union Commission Chair Dr Mahamat in #Zim today: Listen to Pres Ramaphosa on the proper role of the Army in changes of political leadership which exposes #GeneralChiwenga, #EmmersonMnangagwa & #HarareJunta for their #BloodyCoup that overthrew a constitutional govt! pic.twitter.com/uEWe4jccM2