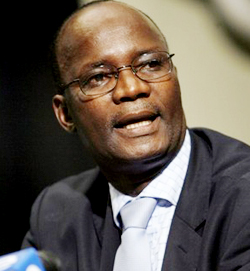 HISTORY has proved that it’s an effort in futility to dance with a porcupine, a worthless exercise synonymous with the folly of seeking pleasure by romancing a stone. In an attempt to rebrand and consolidate Zanu PF’s grip to power after the disputed July elections, professor Jonathan Moyo, chief architect of the reform crusade in the party has taken many by surprise, for, far from being the most hated media hangman the country has ever known alongside the infamous Tafataona Mahoso, he appears to have found God at the last minute; to the extent that many now view him as a source of hope in these dark hours.
Indeed , the learned professor didn’t waste time in cleaning the rot at ZBC, culminating in the dissolution of its entire board only to be followed by the suspension of the overzealous Happison Muchechetere(former chief executive officer) and Caesar Zvayi (former Herald editor), both known Zanu PF fanatics. Not only that, the charm offensive also witnessed the setting up of the Information and Media Panel of Inquiry (IMPI), mandated with examining professional standards and ethics in the media fraternity , a process which would advise the government on media policy. What a dramatic shift and change of heart from the minister  , who, not long ago, was instrumental in the crafting both  AIPPA and POSA!
To consolidate the charm offensive and capture the hearts of the oppressed, Moyo was quick to condemn the arrest of the Daily News scribes Stanley Gama and Fungai Kwaramba on trumped-up charges as such action by the police is deemed counterproductive for it betrays the goals of his grand plan, much to the appreciation of the media fraternity who seem to have found an unexpected ally in the professor, a man who used to be a thorn in their flesh. In the same token, the born-again and charismatic minister wasted no time in condemning the Zimbabwe Republic Police (ZRP) on their cancellation and disruption of activities organised by ZUJ to mark the World Press Freedom Day last Saturday.
Expressing his “frustration”, the minister fumes: “It should be said that the use or show of force does not inherently, or by itself, inspire any national confidence” and that “with the advent of the new constitution which came into full effect upon the inauguration of His Excellency President Robert Mugabe on 22 August 2013, freedom of the media in Zimbabwe is now a constitutional matter and nobody has the right or option to ignore this fundamental reality of our national jurisprudence”.Advertisement

Who said miracles don’t happen in the 21st century? Indeed, it would be naïve for the media fraternity, let alone the general populace, to dismiss the learned professor’s overtures for that is what they have been crying for – a saviour to untie them from bondage. The minister, in retrospect, could have learned where he went wrong in the past and probably wishes to turn on a new page and dismissing him at this hour is suicidal for he is the hope all have been dreaming of.  But is that the case, really?
That being said, it’s suicidal if not an act of stupidity on the part of the oppressed to embrace the charismatic minister with open arms, for, far from being a born-again, he may still be a leopard disguised in a sheep’s clothing as his charm offensive might be driven by nothing other than selfish and personal interests divorced from the plight of the oppressed. For , how can the minister be taken seriously by those in bondage when he nicodemously emerges from the grave in the company of witches with flesh between his teeth  while struggling to rub off stains of blood scattered all over his lips from human flesh?
Nkosana Moyo realised the paradox of this gamble before jumping off the titanic, leaving his image intact. Isn’t the professor a beneficiary of the same exploitative and corrupt system that has reduced millions into paupers? How can the same person claim high moral ground and seek to be taken seriously?  Naively, some media houses have embraced the born again minister with open arms forgetting that he rubs shoulders daily with people known to have committed serious atrocities in the past.
Not only that; Jonathan Moyo goes to great lengths in trying to differentiate the institution of the police force from the office of the President as if the two are not the same. Isn’t there a realisation, provided the minister is genuine in his offensive, that the ZRP is an extension of Mugabe’s hand? The learned professor takes pride in misleading the public into believing that Mugabe isn’t part of the problem for the brutality being witnessed is the work of rogue elements within the institution of the police force. But is that the case; and isn’t there a symbiotic relationship that binds police boss Augustine Chihuri and Mugabe and how can a genuine reformist attack the former without even scratching the latter?
More so, why is the learned professor silent on the need to align the country’s laws with the new constitution? Isn’t there a realisation by the minister, provided he is genuine, that existing laws such as AIPPA, Public Order and Security Act (POSA), Criminal Law (Codification and Reform) Act, Broadcasting Services Act (BSA), Censorship and Entertainment Controls Act, Interception of Communications Act, Official Secrets Act, among others, are some of the laws that urgently require wholesale repeal or amendment of some of their provisions?
Indeed, how can the setting up of the Information and Media Panel of Inquiry be a worthwhile exercise worth funding and undertaking when the above draconian pieces of legislations are in place? Even for the participants roped up in this futile exercise, how can they justify their stay on this panel when they are not protected by the constitution meant to shield them from outside evil machinations? How on earth can the media fraternity and the populace at large afford to be appeased and be bought by pieces of silver, for, professor Moyo‘s grand plan is premised on perpetuating Zanu PF’s grip on power for eternity and not the  advancement of  the interests of the majority.
By buying this cheap narrative initiated by the minister, Zimbabweans risk appeasing dictatorship, thus perpetuating their suffering – a practice is akin to feeding their friends to a crocodile, one at a time, the assumption being that the monster will eat them last. The ordinary people shouldn’t be surprised by the barbaric behaviour of the police force for they are dishing the brew that minister Moyo prepared as the chief architect of AIPPA and POSA.
In the same token, victims would be naïve to believe that the crocodile’s tears are genuine when it cries on lifting its prey above water for the last time as a farewell gesture before disappearing forever into the unknown because, in its mind, those who share its “sorrows” are foolish indeed. Those with ears let them hear and woe to the hard hearted!
William Muchayi is a pro-democracy and political analyst who can be contacted on wmuchayi@gmail.com