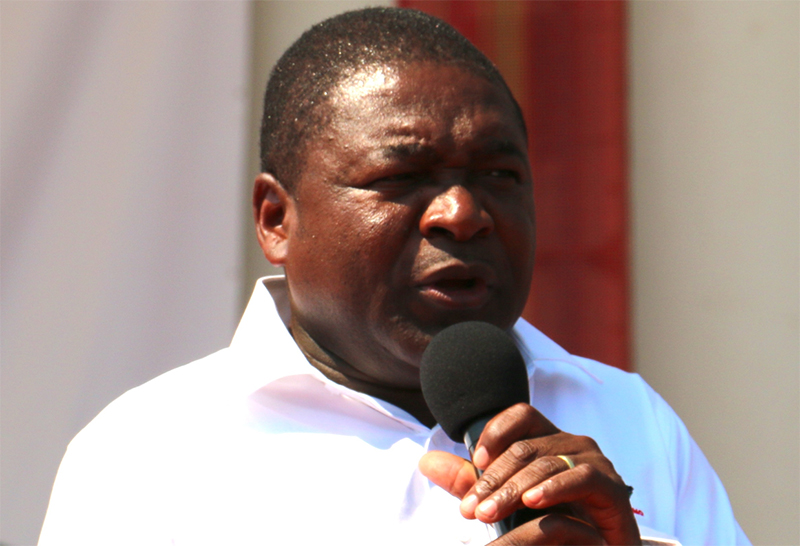 MAPUTO: Mozambique’s president set aside political differences to pay tribute to his arch-rival Afonso Dhlakama and pledged to continue the fragile peace talks he had been holding with the ex-rebel supremo turned opposition politician.

President Filipe Nyusi joined thousands of mourners who flocked to the port city of Beira on Wednesday to pay their last respects to Dhlakama, a towering figure in the country’s political history who died last week.

“We’re here to genuinely pay homage to the man who I’ve been talking to in recent days in search of lasting peace,” said Nyusi in a eulogy at a memorial service for Dhlakama.

“I will continue the walk we started together for peace. I’m available to do this,” Nyusi, urging cooperation from the new Renamo leadership.

“We’ll be happy if we successfully continue the peace project we started together,” he said, adding: “We can’t have democracy without a strong opposition.”

Ossufo Momade, Renamo’s interim leader until the next party congress whose date has not yet been fixed, vowed to carry the baton from Dhlakama.

“We will continue your struggle. You, father, taught us how to sacrifice ourselves to fight for the country,” Momade said.

“You did everything for this country. Now is our time to take forward your struggle,” he added.

Dhlakama led Renamo for nearly 40 years before his unexpected death at the age of 65.

He played a central role in Mozambique after it gained independence from Portugal in 1975.

Dhlakama led Renamo, created in 1976, through a deadly civil war against the Marxist-inspired Frelimo government until the conflict ended in 1992.

He then gradually transformed Renamo into an opposition party, which failed to take power from Frelimo in elections and again took up arms between 2013 and 2016.

In December 2016, Dhlakama announced a surprise truce with the government, taking the major first step towards a formal peace deal.

Dhlakama had recently held talks with Nyusi and he was seen as playing a key role in advancing the nascent peace process.

His departure has cast a shadow over the negotiations, five months ahead of local government elections and 18 months to the next presidential and legislative elections.

In a fiery tribute, Dhlakama’s niece and head of Renamo’s parliamentary group Ivone Soares lauded her uncle for not caving into incessant attacks by the “system and this indigent regime”.

Dhlakama “protected us from the tyranny, dictatorship, of those who abuse the wealth of country for their own benefit”.

‘Let us all be Dhlakamas’

“He’s gone but we are here to continue his fight. We will continue the fight with bravery. Let us all be Dhlakamas.”

Dhlakama died of a suspected heart attack last Thursday at his hideout in the Gorongosa Mountains in the centre of the country.

The memorial service was held in Beira, capital of Dhlakama’s home province of Sofala.

“It is an irreparable loss. Afonso Dhlakama is the founder of democracy in Mozambique. His fight ended with the communist regime created just after the country’s independence,” said Eufrasia Jordao, a mourner who came from nearby Zambezia province.

There is “nothing more to do at this moment than to pay homage to the founder of democracy, which he deserves. It was Renamo who founded democracy,” said Jose Chitula, a former Renamo member.

“The death of Afonso Dhlakama should not be an excuse to end democracy and return to a one-party regime,” added Chitula, who joined another opposition party, the Mozambique Democratic Movement (MDM).

Posters bearing images of Dhlakama from various moments of his political life were plastered around the square.

Dhlakama will be buried in his native village of Mangunde, southwest of Beira, on Thursday.