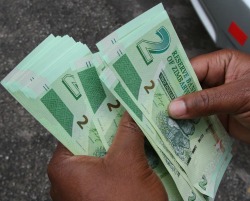 AS ZIMBABWE continues to grapple with cash shortages with banks limiting daily withdrawals to as little as $80 per week, bond notes have flooded the Mozambican markets.
Reserve Bank of Zimbabwe, last year, introduced a surrogate currency as a panacea to cash shortages and curb externalization of foreign currency but the situation has worsened with bank queues refusing to go.
A survey conducted by New Zimbabwe revealed that bond notes have actually flooded the Mozambican side and are being used alongside the local meticals (MT) in areas such as Mesica, Manica and Chimoio.
Vendors and taxi operators accept bond notes as legal tender and most touts exchange them for either US dollar or meticals.
The bond note is trading at 55 000 per 100 while the USD is pegged at 60 000.
Vendors in Mozambique said they have accepted bond notes because most of their clients were Zimbabweans who flood the country to buy bales of second hand clothes, kitchen utensils and cosmetics.

“At first we resisted bond notes but we discovered that we were losing out because our clients are Zimbabweans. We now accept bond and then we cross to Zimbabwe to exchange with USD at the black market.
“As you can see we have pegged bond at 55 against meticals and then USD at 60 depending on the notes that you have,” said one vendor who was carrying more than $1000 in bond notes.
Another Zimbabwean who identified himself as Jacob Marowa from Harare and said works for Asians said the local business community was accepting bond note at low rates and then buy USD in Zimbabwe on the black market.
“I go to Zimbabwe with a bag full of bond to buy USD every day. There are plenty of bond notes circulating this side of Moza thus why banks in Zimbabwe are failing to supply enough cash to their clients.
“Even street vendors who sell sweets have bond notes and coins. They prefer bond because they know its par with USD in Zimbabwe unlike the local worthless meticals,”said Marowa.
He said he smuggles the bond notes during midnight and buy the USD on the black market for 103 bonds for US$100.
A local economist, Terry Zijena, said as long Zimbabwe continues to import goods such as clothing, cosmetics and utensils, the country will continue to face cash shortages as the money is being smuggled outside through porous borders.Advertisement

“The Mozambican business community is taking advantage of the crisis in the country to make money. They are rating the bond at 55 against local currency and 60 against USD. Already locals are disadvantaged by these exchange rates but they don’t have choice because they want to survive,” said Zijena.