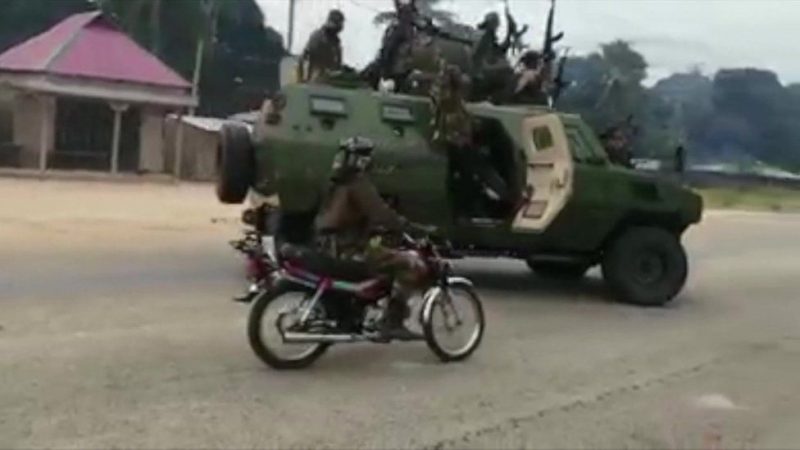 ISLAMIST militants have ambushed a convoy that was trying to rescue civilians from a hotel amid fighting in northern Mozambique, reports say.

A South African man has been confirmed as dead, but many details are unclear.

Hundreds of people fled the fighting, which began on Wednesday in the town of Palma. Evacuees included foreign gas workers.

French energy giant Total said it was forced to suspend operations at a huge gas project nearby.

The company had only just announced it would restart work on the $20bn (£14.5bn) project which it had halted in January over security concerns.

In a statement, the company said none of its staff were killed in the incident, but the “remobilisation of the project that was envisaged at the beginning of the week” had been halted.

Total added that it trusted the Mozambican security forces, who were working to regain control of the area.

Human Rights Watch said that witnesses described seeing “bodies on the streets and residents fleeing after the… fighters fired indiscriminately at people and buildings”.

Northern Mozambique has been torn apart by an insurgency since 2017.

Militants linked to the Islamic State (IS) group are behind the conflict in the predominantly Muslim region of Cabo Delgado. The fighting has left more than 2,500 people dead and 700,000 displaced.

There are unconfirmed reports of British citizens being caught up in the hotel siege.

A UK Foreign, Commonwealth and Development Office spokesperson told the BBC: “Our High Commission in Maputo is in direct contact with authorities in Cabo Delgado to urgently seek further information on these reports.”

Insurgents launched a surprise assault on Palma earlier in the week, attacking shops, banks and a military barracks.

Hundreds of people fled the fighting, running into forests, mangroves or nearby villages. About 180 foreign and local gas workers took refuge in the Amarula Palma hotel.

Some tried to escape the hotel in a convoy of vehicles on Friday, aiming for a nearby beach, Reuters news agency quoted Lionel Dyck as saying. Mr Dyck runs a South African private security company that works with the Mozambique government.

But they were ambushed outside the hotel, Mr Dyck said, adding that at least 20 people were initially flown to safety in helicopters.

The South African man confirmed to have been killed was thought to have been driving one of the escape vehicles.

One source told the BBC several people were successfully evacuated and reached the city of Pemba, 420km (260 miles) south of Palma.