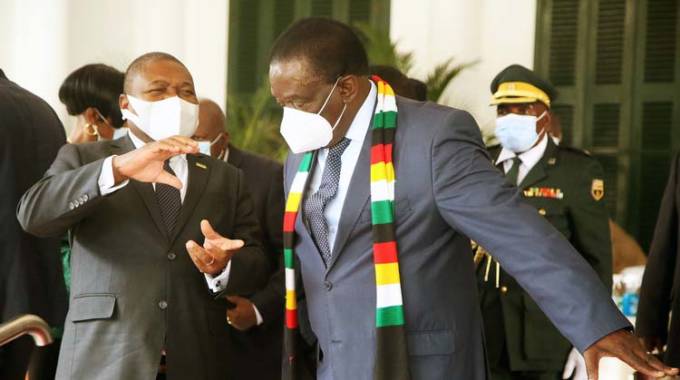 MOZAMBIQUE’S President Filipe Nyusi is in Zimbabwe on the invitation of President Emmerson Mnangagwa.

Nyusi, who is the acting chairperson of the Southern African Development Community (SADC), is holding talks with President Mnangagwa at State House.

The talks are centred on the situation in Cabo Delgado where insurgents massacred people in March 2021 in the Mozambican city of Palma.

On Friday, South Africa’s President Cyril Ramaphosa said SADC countries were prepared to assist Mozambique to fight the insurgency that has destabilised the northern part of that country.

Mnangagwa told journalists: “He flew from Chimoio this morning just to have a chat with me, we covered many things but most importantly we felt that the Joint Permanent Commission between Zimbabwe and Mozambique which last met as far back as 2013, should now be resuscitated going forward. He also briefed me about the security situation there.”

Nyusi said he intended to make more regular visits to Zimbabwe during weekends.

“I believe I have to come here more times on Saturdays or Sundays. We discussed a lot including economic issues, some of which will be discussed in the Joint Permanent Commission which President Mnangagwa spoke about,” he said.

Nyusi also briefed Mnangagwa on the situation in Cabo Delgado province, northern Mozambique where Islamic insurgents recently carried out acts of violent terrorism resulting in the death of dozens of people, including foreigners following an attack on the town of Palma.

“This must always be discussed because it is a problem facing our people. We are exchanging views, you will remember we had a SADC Double Troika summit in Maputo and we are planning to have a meeting again this month,” he said.

An extraordinary Sadc summit will be convened in Maputo on June 20 to further discuss the security situation in Cabo Delgado.