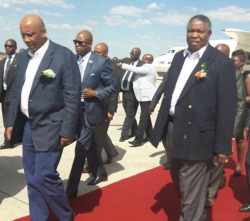 LESOTHO King Letsie III on Wednesday said he was mesmerized by the sight of the majestic Victoria Falls when he visited the resort town.
The King of the Mountain Kingdom arrived in the country on Monday on a four day state visit and was hosted by President before a state banquet and meeting on Monday and Tuesday in the capital.
In Victoria Falls, King Letsie who was accompanied by a huge delegation from his kingdom but without wife Queen ‘Masenate Mohato Seeiso, went on an hour long boat cruise with Vice President Phelekzela Mphoko, Matabeleland North Minister of Provincial Affairs Cain Mathema, Victoria Falls Mayor Councillor Sifiso Mpofu, Lesotho Minister of Health Dr Molotsi Monyamane before touring the Rainforest.
They also visited the Crocodile Farm before flying back to Harare at around 5PM ahead of his departure to Maseru Thursday.
Fifty-Three year old King Letsie III, who succeeded his father in 1997 after his death in a car crash in 1996, said he was enthused by his first visit to the resort town.
“It’s been a pleasure to visit the magnificent and beautiful natural wonder. This will be a memorable visit for me and am looking forward to coming back,” he told journalists.
King Letsie said there was a possibility of the two countries working together in tourism.
In Harare between Monday and Tuesday, the king visited the National Museum and Monuments, the National Heroes’ Acre as well as the Lion and Cheetah Park.
The King’s visit was meant to cement the relations between the two countries which saw Lesotho extending crucial assistance to Zimbabwe during the liberation struggle, as some political figures attended school in that country.
Lesotho also holds Zimbabwe highly for helping the Mountain Kingdom deal with a military coup in 2014.Advertisement