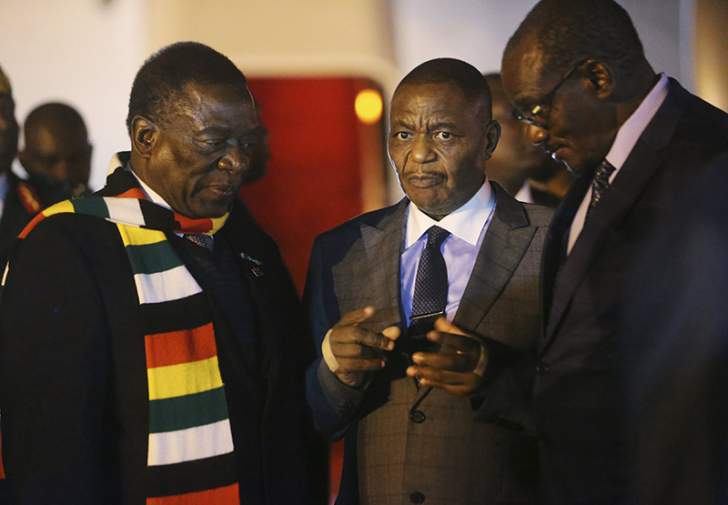 President Mnangagwa and VPs Chiwenga and Mohadi
Spread This News

MDC MPs Wednesday demanded the presence of the country’s two Vice Presidents to respond to their questions during parliament’s question time in a period the country’s economy continues to take a nosedive.

Mutare Central MP, Innocent Gonese told parliament that VPs Constantino Chiwenga and Kembo Mohadi rarely attended parliament especially during Wednesdays when backbenchers get the opportunity to grill ministers and VPs on a lot of policy matters.

“Honourable Speaker, there is also the issue of Vice Presidents. I think you have noted that ever since we have started, I don’t actually recall a day where the two honourable vice presidents were in attendance for the question time.

“I am not sure whether they understand Section 107 of our constitution and our standing orders.

“I am not sure whether they are aware that they are obliged to be present in Parliament in order for them to answer all questions,” Gonese said.

He said MPs were also worried about the continued absence of cabinet ministers during Wednesday sessions to take up questions by MPs.

In response, Mudenda assured the MPs he was going to relay their concerns to President Emmerson Mnangagwa, who, during his time as VP, religiously attended parliament to respond to questions by MPs.

Mudenda said he was yet to receive any response from the Clerk of Parliament following earlier complaints by MPs on the habitual absence of cabinet ministers.

“I have not received any explanation from the Clerk of Parliament or the Chief Secretary, I wonder where these Ministers are,” said Mudenda.

The Speaker also raised his own concerns about the absence of many MPs in parliament, describing Wednesday’s sitting as the “worst ever”.

“Wednesday question and answer session is the worst non-attended by Honourable members,” he said.

MDC MPs virtually brought the house down recently as they demanded parliament should break tradition during a Tuesday session and allow them to grill Finance Minister Mthuli Ncube on the country’s deteriorating economic situation. Ncube rarely attends parliament.

This comes as government’s economic experiments continue to backfire with prices of goods and services shooting through the roof while fuel and electricity remain scarce.

Zimbabweans have grown increasingly anxious about their future as the value of their RTGS dollar incomes continues to erode by the day.