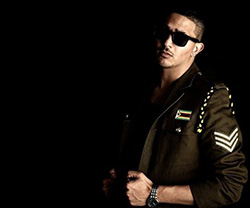 HOT on the heels of an enigmatic release of his latest single ‘She is Worth It’, a collaboration with Ghanaian Soul Healer, Sonni Balli, Zimbabwean Afro-pop sensation Kazz aka Mr Boomslang is going solo and working with Africa’s finest acts.
The single, dropped last week, is an African banger for the ladies and is currently making airwaves in the United Kingdom and topping the charts in Africa.
Sonni and Mr Boomslang had embarked on a four-year sabbatical that isolated their joint efforts from their usual eye-catching collaborations.
The last song they recorded together in December 2012 was the hot single, “So Fine” which received commendable airplay worldwide and helped propel their careers to the next level.
Mr Boomslang has gone further and notched up collaborations with Nigerian heavyweight rappers, JJC Skillz (founder and creator of Big Brovaz, and producer of D’banj), and Queen of Dance, Rozalla Miller.
Following the fame he has enjoyed in the UK after a ground breaking storm on to the music scene with famous sibling Bkay in 2005, they churned out another hit single “Ndikati Hello” with Urban Grooves artist, Decibel.
However, Mr Boomslang continues to push boundaries in his endeavour to pursue a solo career.
Not only is he focusing on his musical side but venturing into entrepreneurships which has seen him launch his budding clothing line and Digital Media production enterprise under the brand ‘Boomslang Production’.
His efforts and success are deeply rooted in his will to give his works a true home grown authentic feel that is purely Zimbabwean yet innovative.
Mr Boomslang: SHES WORTH IT