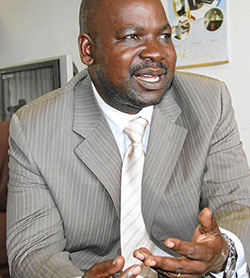 OUR moral turpitude as society has irreversibly worsened. With many scandals being reported daily in our media, the country is left shocked at the seemingly unending tide of one scandal after the other. Graft and corruption have permeated to the core of our social fabric. It is therefore not surprising that Zimbabwe is now one of the most corrupt countries in the world.
In the 2013 Transparency International corruption perception index, Zimbabwe was ranked 157th out of 177 countries, with one being the least and 177 being the most corrupt. The country’s Prosecutor General, Johannes Tomana, does not appear to have a functioning approach to combating corruption. Although he was promoted as a virile individual of immeasurable ability who was fit for purpose during his appointment, it is fair to say he has failed as a legal lieutenant. He comes out as someone lacking legal scope and cognitive power to prosecute those committing various crimes. The PSMAS scandal is the case in point.
The Prosecutor General hit his absolute worst when he publicly proclaimed that the Salarygate culprits broke no law. His widely publicised view is that those executives may be morally rotten but not legally guilty of any offence. Contrary to his declarations however, the salarygate scandals are both moral and criminal transgressions. By fair and humble opinion, the executives together with their retinue of colluding board members are guilty of corporate fraud. A crime is committed when it can be proven beyond reasonable doubt in the minds of fairly minded people that a crime was likely committed.
By all counts, the actions of these executives point to well-organised and well-orchestrated plans to commit fraud under the guise of salaries and board allowances. But what is fraud? Fraud and all its related misconduct involves a wilful or deliberate act or failure to act with the intention of obtaining an unauthorized benefit. By another angle, fraud is the deliberate misrepresentation of fact for the purpose of depriving an institution of its property, asset or finances.
Fraud comes in different forms. It covers corruption which includes conflicts of interest, bribery, illegal gratuities, and economic extortion. Another form of fraud is skimming which may refer to the direct theft of cash in addition to hiding it from tax authorities. The perpetrator may hide the taking from an employer, business partners, or shareholders. The use of fraudulent statements in financial reporting is another form of skimming.Advertisement

From the foregoing, it is clear that the actions of some corporate executives were deliberate, wilful, unauthorised and in some cases manipulated to mislead the public about what was happening behind the scenes. The majority of the scandals hid under the term ‘authorised’. But were these benefits properly authorised and will these executives have any locus standi before the law?
To begin with, board appointments come with clear terms of reference for members concerned. Their powers are also specified in the terms of appointment. In addition, the Articles of Association as read together with the Memorandum of Association provide parameters within which company directors operate. Corporate history has travelled through rough patches before and experienced inappropriate actions and decisions by company directors and board members. As a result, the ultra vires doctrine was developed over time to deal with abuse of boardroom power.
Ultra vires is a legal doctrine that seeks to identify the use of authority “beyond genuine powers granted”. In the case of PSMAS board members and others, the executives acted ultra vires and outside the protection of the “corporate veil” doctrine. The corporate veil is a legal shield which protects shareholders and directors from legal prosecution in their individual capacities provided they acted in good faith and for the good of the entity which they managed.
However, the actions of the majority of these scandalous executives make them unfit to benefit from the protection of the law. It was highly scandalous and fraudulent for PSMAS board members to award themselves allowances reported to be more than US$100,000 per annum for few board sittings. Their actions and decisions cannot be viewed as being made for the benefit of the organisation they managed and, therefore, ultra vires. Under such circumstances, the corporate veil must be lifted so culprits can be prosecuted individually.
There is a suspicious link and relationship between the amounts awarded to PSMAS chief executive and those awarded to board members. The relationship is that both amounts were outrageously high, indicating a scam and collusion between the CEO and board members. It was a case of one palm greasing the other so that both can swim in oil. It would also be interesting to know if those directors and board members allowances were correctly reported and disclosed in the financial reports. When was the last audit conducted? Who were the auditors who failed to qualify the accounts and report the scandal as an “extraordinary issue”? Failure by management to produce timely accounts, especially where there are irregular transactions can be regarded as skimming and therefore criminal in nature.
All salarygate cases have three dimensions. These three distinct elements are moral, criminal and material prejudice.  Good corporate stewardship was thrown through the window. It is abundantly clear that organisations were materially and financially deprived of their assets. The culprits must be held to account and made to repay all the monies fraudulently acquired.
The tax evasion issue is a sure criminal case and we have enough laws to deal with that. ZIMRA’s commissioner general must take appropriate steps to recover and punish the culprits financially. Whilst lowly paid workers are heavily burdened with tax obligations, the executives are making a mockery of our tax laws by evading tax. Across the globe, tax evasion is a serious criminal issue and perpetrators are jailed.
Remarks by Finance Minister Patrick Chinamasa indicate that the government is fully aware and regards the actions of these executives as illegal. The minister was quoted as saying “government has been seized with the task of uprooting rampant corrupt practices, excessively high and unjustified salaries and allowances that most State enterprises, parastatals and local authorities have been, either illegally, procedurally, unreasonably or immorally awarding to chief executive officers”.
Whilst recent salary caps are a step in the right direction, more action is needed in fighting corruption. The police, the Prosecutor General and the President must step up the fight. So far the President’s actions have been limited to empty rhetoric. Society and the public in general must play their part by shunning corruption and reporting to authorities any suspected cases.
More importantly, the Prosecutor General must be prepared to drag these culprits before the courts instead of claiming that they are innocent before investigations are carried out. One wonders how a tax evader can be declared innocent. The Prosecutor General must remember that he is not the judge and must leave the task of passing verdicts to judges. Rather, he represents the interests of society and must not be seen to protect perpetrators of corruption. Incompetence and selective application of the law has come to characterise his tenure. The country deserves better.
Wezhira Marihwepi is a Zimbabwean writer. He can be contacted at wmarihwepi@gmail.com