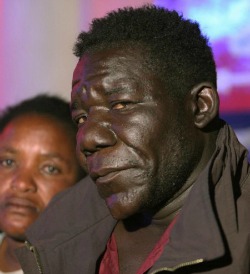 A FEW days after losing the Mr Ugly 2015 contest, two-time reigning champion William Masvinu, has called for a re-run accusing the judges of being biased towards the eventual winner Mison Sere.
He is arguing that if the 2015 winner came 4th in the previous edition held in 2013, what has changed today since he used the same face to compete on both occasions.
Masvinu came 2nd in this year’s edition that was held last Friday at a local night club in Harare having won it in 2012/3.
He had early on accepted defeat saying that every dog has its day and vowed to come ‘well prepared’ in 2017.
But competition organisers David Machowa dismissed Masvinu’s allegation, saying he cannot claim monopoly to ugliness but should accept defeat and enter the 2017 edition if he will still be interested.
An angry Masvinu told NewZimbabwe.com that facial looks of old people do not change and he would have been happy to lose to someone new who has never participated in the competition.
“He came fourth when I took the 1st prize in 2013. What has changed today; how has he become uglier? This stinks. I want my top prize money.
“I am still the undisputed champion.”