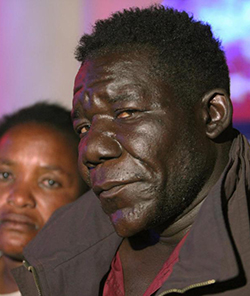 “MY ugliness comes naturally to me and, although I did a bit to prepare for the show, l will let my natural looks do the rest.”
These are the words of reining Mr Ugly, Wellington Masvinu, as he prepares for this year’s edition of the competition which will be held on the 24th of this month.
The Epworth based Masvinu will battle it out with 13 other contestants.
“I won the competition in 2012 and 2014 and I will do it this year,” he said.
“My ugliness makes me shine and those that have registered for this year’s contest should expect a good run for the money as I am aiming for a hat trick.”
Masvinu however told this publication that his looks have also caused him some problems.
“Employers are not keen to employ me maybe they are scared of my looks,” he lamented.
Mr Ugly currently works as a porter at Mbare Musika green market in Harare, often doubling as a tout.
In 2013 Masvinu staged a mock wedding on the streets of Harare and his best man was his first runner up Benny Chakanyuka.
The organiser of the event, David Machowa, said everything is under control for this year’s edition adding a venue has since been secured.Advertisement