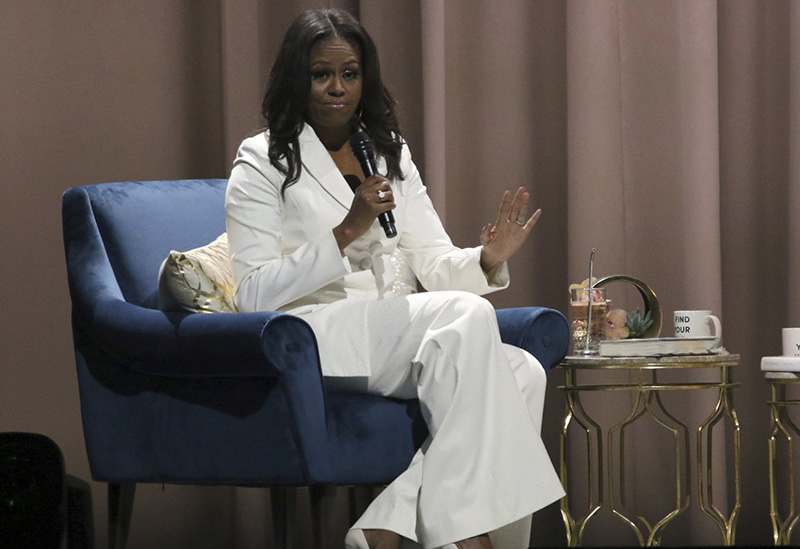 INGLEWOOD: Michelle Obama said she felt anxious before giving her emotional New Hampshire speech in 2016 condemning Donald Trump for bragging about sexually assaulting women in a recording more than a decade ago.

The former first lady recalled that she wrote the outline of her speech addressing Trump’s comments on the infamous 2005 “Access Hollywood” tape while sitting in a waiting room as her mother was having back surgery. She gave the speech at an event in support of Democrat Hillary Clinton.

“When I’m telling the truth, I’m not afraid,” Mrs. Obama said. “I was anxious about giving it. I know how I feel, and what I wanted to do at that time was take women to that place where we know how we feel when we are demeaned. We have all experienced that at some point in time. Women don’t have the platform to say it out loud.”

But Mrs. Obama also said that she had gotten to the point where she was less concerned about what people thought about her words. “It was also (Barack Obama’s) second term. I was like ‘I’m done with caring what people think.’ It’s time to put some truth out there.”

Mrs. Obama spoke Thursday at an event with “black-ish” actor Tracee Ellis Ross at The Forum near Los Angeles. She’s promoting her best-selling book “Becoming,” which was released this week.

She never mentioned Trump’s name, but said she “hated bullies.”

“I don’t know if men really understand what we bare as women,” she said. “The sad thing is that women aren’t safe in this world. We are at risk to be cut all the time. I wanted to bring voice to women who know what that feels like.

“You’re just putting up with some man’s voice saying some stuff that is inappropriate and out of line, and they think it’s a joke. It has a lasting impact. … You have the power to vote against it.”

She entered the stage to Alicia Key’s “Girl on Fire” in her second stop of her 12-stop arena book tour. She kicked her tour off in a talk with Oprah Winfrey in Chicago.

Ten percent of ticket costs are being donated to local charities, schools and community groups.

Much of the 90-minute conversation between Mrs. Obama and Ross was filled with laughter. They talked about Mrs. Obama having a panic attack, getting marriage counselling and joked about her husband’s walk being “sexy” but annoyingly slow sometimes.

In the book, Mrs. Obama mentions a time when she had a fist fight with a girl while growing up on Chicago’s South Side.

“You did? A physical fight?” Ross asked.

“Yeah, I talk about it in the book. What other kind of fight — you see, this is Tracee. ’A physical fight. With your hands,” Mrs. Obama replied.

She added: “Those are the only fights you had on the South Side. What? You thought people were debating? No, girl. We were throwing down — like, kickin’.”

The former first lady’s husband, daughters, mother and brother gave their impressions of her maturation in a video montage. Her mom talked about how her daughter initially disliked politics and Barack Obama said he showed up to their first date late.

Earlier Thursday, Mrs. Obama made a surprise visit to an early education centre located in Skid Row in the downtown Los Angeles. She spent time reading with a group of 4-year-old children from an underserved area of the city.