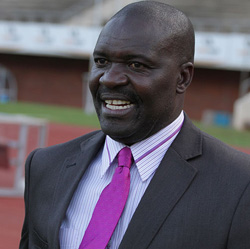 CAPS United goalkeeper’s coach Brenna Msiska has been axed as head coach after Taurai Mangwiro reshuffled his technical with junior coach Albert Mabika also set to be one of the coaches to be affected by the changes.
Mangwiro had Saul Chaminuka and Msiska as his assistants last season.
However, Chaminuka, a former head coach at army side Buffaloes, has been hired to take over the reins at ZPC Kariba.
ZPC, newcomers to the premiership decided to part ways with Jostein Mathuthu who led them to the top flight after it emerged that he did not have a Caf C licence certificate- the minimum requirement to coach at the Premiership level.
This left Mangwiro with Msiska as his only assistant at senior level while Albert “Dhalala” Mabika oversees the junior development side.
But as Caps United regrouped this week for the 2014 pre-season preparations, Msiska and Mabika were on the sidelines as over 91 players who attended trials at Italian Sports Club went through their paces under the watchful eyes of Mangwiro.
Mangwiro has already recommended the recruitment of new technical members of the team to the board of directors following the departure of Chaminuka.
The board is however yet to approve his recommendations.
“The board is still to meet to approve my recommendations for assistant coaches. But what I can tell you is that there are going to be major changes to the technical team. We are not going to have the same personnel who were in the technical team last season.
“Already, Chaminuka has left and there are going to be more changes. Msiska will have to go through some interviews just like I did,” said Mangwiro.
The Green Machine did relatively well last season after finishing a credible fifth position.Advertisement