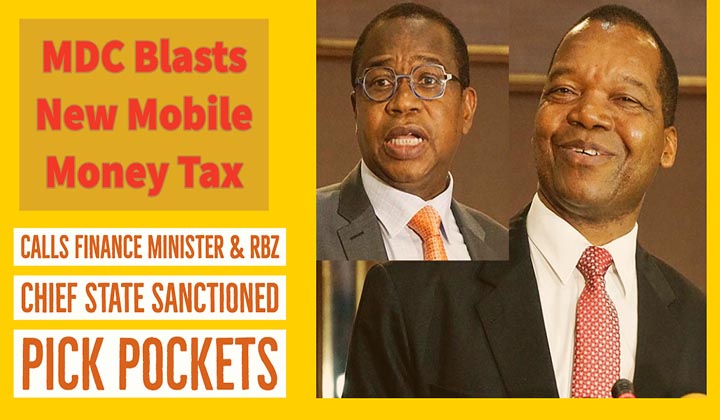 Zanu PF sharpened the robber state (through a) shameless announcement of raft meant to pick-pocket the poor in a bid to fund the lifestyles of the political elites.”

THE monetary and fiscal policy measures announced by the Treasury and the Reserve Bank of Zimbabwe (RBZ) represent a “toxic concoction” aimed at pick-pocketing the poor, the main opposition MDC party has warned.

The charge was previously 5 cents per transaction, regardless of the amounts involved.

Analysts however, warned that the new tax regime would hit the poor hardest in an economy where ordinary people are forced to resort to mobile money due to the shortage of cash.

In a statement Tuesday, the MDC said described the tax as “day light robbery and an encouragement for creative transactions which will fuel black market”.

“The MDC is disappointed but not surprised by the so-called measures by both Mangudya and Ncube. They border on sheer arrogance, narrow selfish interests and utter ignorance of how to turn around the status quo,” the opposition party said.

“Zanu PF can’t be the one to punish electronic transactions when they have been celebrating a cashless economy.

“As a matter of fact, notes and coins contribute a paltry 2% of broad money supply as per official statistics from both the Treasury and the RBZ.

“More importantly this is a war being declared on a particular class of Zimbabwe, the working people.

However, Mangudya and Prof Ncube have defended to new approach as “progressive”.

Said the finance minister; “Two cents per dollar transacted, that is much more progressive than before because what it means before is that whether your transaction was $1 you would pay 5 cents whether its $5 million you still pay 5 cents.

“So clearly, that is unfair and that is regressive, and this is a much better system, it is progressive, it is line with expenditure in terms of value, it’s a fairer system. I do not think it is going to increase the tax levels at all.

“The current proposal is progressive, this is linked to value. For small purchases in terms of denominations, this is quite progressive because in a sense you are paying a percentage of the size of your transaction.”

“What is bad for us is the issue of mobile payments because for every $1 000 you spend you are paying $20,” he told State media.

“I understand that Government needs to widen its tax base, however, that affects us ordinary Zimbabweans when making mobile payments,” he said.

“People are saying now, look, if we want to use cash we cannot find it, so we are actually stuck with mobile payments and that way we are going to have to pay more, but I think the minister and reserve bank had to do a balancing act.”

Meanwhile the MDC also criticized other proposals by government such as the retention of the Bond Notes and making foreigners pay for goods and services in foreign currency.

“Then comes the insanity around foreigners paying for services in forex, this is an unenforceable insanity,” the party said.

“The gentlemen are probably intoxicated by a high grade of Indian hemp so potent that it needs to be protected by a patent.”

The statement added; “We have always stated that the bond note must be repealed, that would be the end of story.

“The move to create two types of accounts borders on illegality, such acts must never happen in a democratic society.

“The government is introducing a new currency through the back door in violation of the RBZ Act with all its flaws.”