THE Mthwakazi Republic Party (MRP) has said late Vice President Joshua Nkomo’s decision to turn down an chance at splitting Zimbabwe into two, on tribal lines, is partly to blame for the murder of some 20 000 mainly Ndebele speaking people during the Gukurahundi genocide.

Late President Robert Mugabe’s North Korean trained 5th Brigade butchered civilians in the Midlands and Matabeleland provinces under the guise of searching for dissidents between 1983 and 1987. 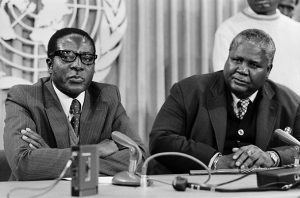 Speaking at a rally in Khame, Plumtree, MRP president Mqondisi Moyo said the former Zapu president, Nkomo, refused an offer to split the nation, at the Lancaster House conference in 1979, as he thought he was going to win the country’s first one-man-one-vote election in 1980.

“I feel sad because we had the opportunity to separate ourselves from Zimbabwe during the Lancaster House talks of 1979 but the late Zapu leader Nkomo refused, he said he wanted the two countries combined because he thought he was going to win not knowing that Mugabe and his colleagues had finished with him,” said Moyo.

“Three years down the line, Ndebele people started being brutally murdered in the hands of Mugabe. If Nkomo had agreed to that option during the talks, there was not going to be a thing called Gukurahundi.

“If only he had not called  for a cease fire in 1982, we were going to defeat Shonas once and for all. I always wonder why Nkomo took his ZPRA troops for training in Russia, Cuba, Algeria and Egypt only call for cease fire.

“This is very saddening because Mugabe and his friends did their homework, it is like they were two steps ahead of Nkomo in terms of thinking because immediately after he called for cease fire and they knew his army no longer had weapons, they stroke.”

MRP is a political party pushing for reconstitution of the Mthwakazi nation through cessation from the greater Zimbabwe.

Moyo’s rally, which was attended by hundreds, was themed, “Coming back for our land, political power, borders; restoration and prosperity for all.”