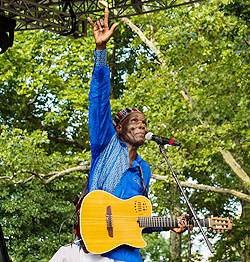 OLIVER Mtukudzi has been inducted into the Afropop Hall of Fame in the United States.

Mtukudzi picked up the honour last Sunday after performing to 10,000 New Yorkers at the Central Park SummerStage festival.
The superstar seemed genuinely moved by the acknowledgement when he received the honour from Georges Collinet of Afropop Worldwide, a Brooklyn-based radio station and online magazine dedicated to music from Africa and the African Diaspora.
Tuku and his band the Black Spirits delivered a fantastic set of classics like ‘Neria’ along with some newer songs. Zimbabweans came out in numbers to see their star.
Previous inductees include Zimbabwe’s Thomas Mapfumo, Senegal’s Youssou N’Dour, Oumou Sangare and Angelique Kidjo.
The honour is bestowed on contemporary African artists who not only excelled artistically but who also played a big role in connecting American audiences to Africa and African culture.
Afropop Worldwide, which was launched in 1988, is distributed by PRI Public Radio International to over 115 stations in the United States, as well as stations in Europe and Africa.
Meanwhile, Mtukudzi has announced a three-stop tour of Canada in August.
He will perform at Vogue in Vancouver on August 16 (Tickets: $30), the Winspear Theatre in Edmondton on August 17 (Tickets: $45) and wind up the tour at the Darnforth Music Hall in Toronto on August 18 (Tickets: $35).Advertisement