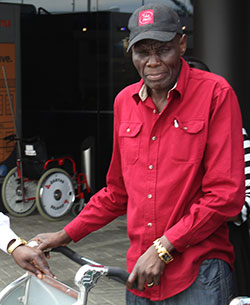 OLIVER “Tuku” Mtukudzi the voice of Zimbabwe’s socio-music commentary has landed in Australia’s administrative capital of Perth ahead of four day enthralling tour of the sub-continent.
Arguably the most powerful creative force to emerge from Zimbabwe since the dawn of Uhuru over 30 years ago Tuku will perform tonight at the Ascot Racecourse.
The Zimbabwean music legend was quickly whisked away by an executive coach on arrival at Pert International Airport a few hours ago.
On Friday the master lyricist will be in Sydney at Roxy Hotel before invading the Forum Melbourn in Melbourne on Saturday. He will wind up the jaunt with a show at the aptly named Tempo Hotel in Brisbane.
These are the Bvuma Wasakara hit-maker first performances Down Under since 2008.
“Wasakara … admit it”, “you are wrinkled …you are worn out” continues to resonate with Zimbabweans years after its release.
“It is a song about growing old and the wisdom that comes from experience,” Tuku says.
Prudently however, he is reluctant to decrypt his lyrics: “I am happy for people to get meaning from my songs … everybody knows right and wrong … deep down they know”.
Mtukudz, the 61 year-old Black Spirits frontman with 61 albums under his belt, has promised his fans, high energy tightly choreographed sharp performances spiced up by his trademark ‘cough’.