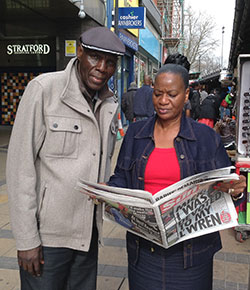 AWARD-WINNING international carrier Ethiopian Airlines has thrown its weight behind The Greatest Hits Concert Tour featuring Zimbabwean music stars Oliver Mtukudzi and Suluman Chimbetu in the United Kingdom this weekend.
The hugely anticipated tour kicks off this Friday night in London at The Royal Regency with the duo being backed by their full bands, the Black Spirits and Orchestra Dendera Kings respectively.
Saturday evening will see the superstars staging the tour’s second and final show at Leicester’s Athena.
To add some magic to The Greatest Hits Concert Tour, proudly organised by Y2K Entertainment Promotions, fans will be able to request the Zimbabwean stars to perform their favourite songs – and they will gladly oblige!
Mtukudzi and his ensemble arrived in London on Wednesday from their North America and Caribbean tour while Chimbetu and his band arrived in London Thursday morning from Harare.
“Everything is on course for an awesome music weekend with visas and travel arrangements for all the touring artists in place. For the Leicester show, due to technicalities, we have moved from Maher Centre to Athena and valued customers will benefit and enjoy more show time,” Y2K said.